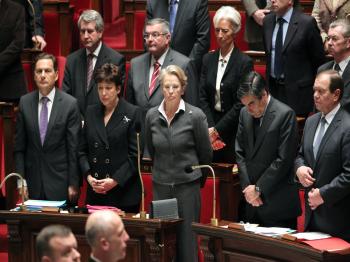 MPs and members of the government observe a minute of silence during the weekly session of questions to government on Jan. 11 at the National Assembly in Paris in remembrance of the two French hostages killed in Niger on Jan. 8. (Pierre Verdy/AFP/Getty Images)
Opinion

The smiling pictures of the two young men, Vincent Delory and Antoine De Leocour—both age 25 and in Niger for De Leocour’s wedding, Vincent Delory was to be best man—make it easy to condemn the failed operation, and the seemingly senseless deaths of the childhood friends. Both men died, apparently shot by their abductors when French special forces attacked last Saturday. They had been kidnapped Friday evening from a restaurant in Niamey, the capital city.

President Sarkozy was at the precise time of the attack, preparing his 2012 presidential campaign by shaking hands in the French Caribbean—a bitter contrast for the families of the victims and for the bride.

Yet in the context of AQIM’s repeated actions against French interests in North Africa, all political parties in France were of a similar mind: terrorists should be given a tough response.

A Special Focus on France

Because of French military participation in NATO in Afghanistan, and Sarkozy’s decision to ban full Islamic veils from public spaces last year, France has become one of the main targets of al-Qaeda.

Public officials in France have warned for months that terrorists could attack. Main tourist sites such as the Eiffel Tower have been evacuated about a dozen times since last fall because of suspected threats.

Yet al-Qaeda’s promised retaliation has not been carried out on French soil, but in the Sahel region. In this vast desert in between Algeria, Niger, Mali, and Mauritania, a few hundred well-organized terrorists plan and execute the kidnapping of westerners, demanding heavy ransoms, or the release of jailed members.

At the beginning of 2010, a French humanitarian worker was let go only after four radical Muslims were freed from jail. In July 2010, French special forces failed to free another humanitarian worker in Niger, whom AQIM later claimed they executed in retaliation for a French attack against one of their camps. Finally, since September 2010, five new employees of Areva in the region were taken hostage by AQIM.

Even before Bin Laden’s message, this had been AQIM’s pattern. In December 2007, four French tourists were executed in Mauritania by terrorists. In June 2008, employees of French nuclear giant Areva were kidnapped by a group of Niger insurgents.

When the two young men were kidnapped in Niamey on Jan. 7, French troops quickly mobilized the van transporting them thanks to a military surveillance network recently set in the region by French intelligence services. Upon receiving the go from President Sarkozy, special forces acted quickly, but ultimately failed to save the lives of the two fellow citizens.

In his message to the press on the same day, Sarkozy condemned the attacks in strong and emotional language.

“The whole nation condemns this barbaric act […] of incredible villainy. This crime, this odious crime, only reinforces the determination of France to fight terrorism and terrorists without a moment of rest. Democracies cannot accept that. Democracies […] have to fight against these barbarians of another age, who want to create terror in the whole world. We will never accept the law of terror and terrorism.”

Sarkozy’s message to al-Qaeda is clear: no matter the cost, France will fight you wherever you are. From a strategic perspective, the message certainly makes a lot sense. The question for Sarkozy is, how much the families of the victims, and the French citizens who sympathize with them, care about excellent strategies.