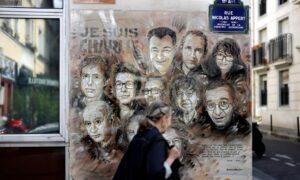 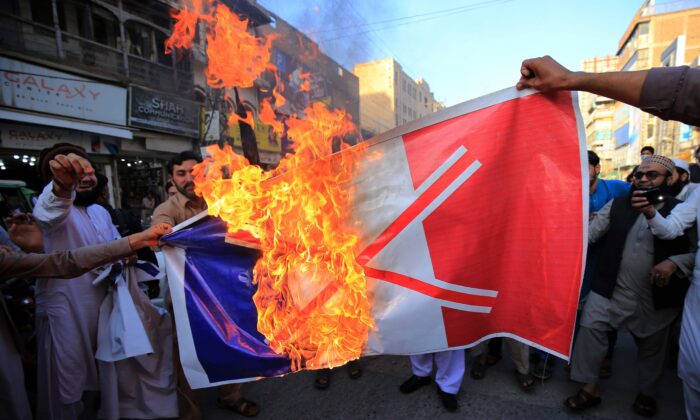 France Warns Citizens to Be Cautious Amid Muslim Fury Over Cartoons

France has warned its citizens to take extra safety precautions while living or traveling abroad, as Muslims in multiple Islamic countries vent their fury over cartoons of the Prophet Mohammad.

“It is recommended to exercise the greatest vigilance, especially while traveling, and in places that are frequented by tourists or expatriate communities,” said the ministry.

France’s national police have called for increased security at religious sites around the All Saint’s holiday this coming weekend.

The terrorist threat remains “very high,” Interior Minister Gerald Darmanin said on France-Inter radio on Tuesday, “because we have a lot of enemies from within and outside the country.”

The latest outburst of Muslim anger was triggered by French President Emmanuel Macron’s reactions to the beheading of a French history teacher by an 18-year-old Islamic terrorist on Oct. 16.

Samuel Paty was beheaded in broad daylight outside his school in a middle-class Paris suburb by the teenage Chechen refugee, who had sought to avenge his victim’s use of the Mohammad caricatures in a class on freedom of expression. Police shot the attacker dead.

President Macron has vigorously defended the cartoons as protected under the right to free speech. At a memorial for the teacher last week, Macron said, “We won’t renounce the caricatures.”

On Sunday, he wrote on Twitter in both Arabic and English, “We will not give in, ever.”

Macron’s government has been planning to tackle what he calls “Islamist separatism,” which refers to the “parallel society” that thrives in some neighborhoods around France where radical Muslims take control of the local population to inculcate their beliefs.

Macron’s stance has angered some Muslim countries. Turkish President Recep Tayyip Erdogan said Macron needed mental treatment and led calls for a boycott of French goods. France responded by recalling its ambassador to Turkey and warning its citizens in the country to take extra caution to avoid danger to their personal safety.

Neither Erdogan nor Khan has publicly condemned the killing of the French teacher.

French Interior Minister Gerald Darmanin retorted on Tuesday that Turkey and Pakistan should not meddle in France’s domestic affairs.

Meanwhile, Islamic terrorist groups ranging from the Taliban in Afghanistan to Hezbollah in Lebanon have condemned Macron’s defense of the Mohammad cartoons.

Apart from protests, there have been growing calls in several Muslim countries for boycotts of French products.

The publication or display of images of Mohammad, which Muslims see as blasphemy, has triggered several terrorist attacks in France.

After cartoons depicting Mohammad were published by French satirical magazine Charlie Hebdo, its editorial offices were attacked in 2015 by gunmen who killed 12 people.

Last month, as a trial of 14 alleged accomplices in the 2015 attack opened in Paris, the magazine republished the cartoons to underscore the right of freedom of expression.