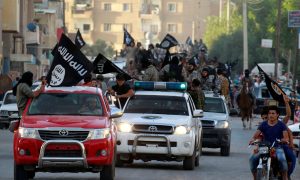 Biden: US Watching for Terrorists, Including From ISIS, Near Kabul Airport
0
Share Now
TelegramFacebookTweetEmailTellMeWeReddit
Copy Link 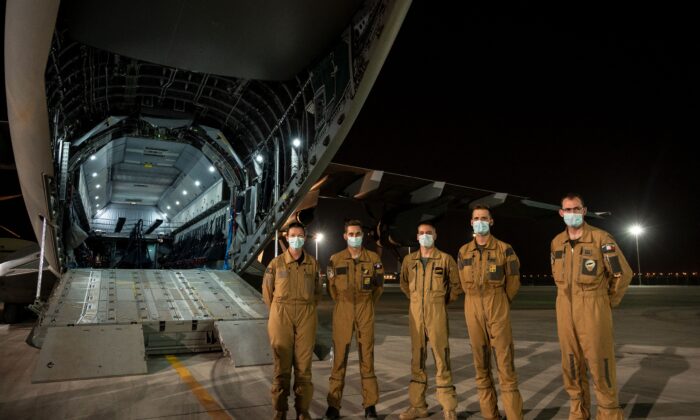 The crew of an A400M military transport aircraft poses after evacuating people from Kabul as part of the operation "Apagan" at the French military air base 104 of Al Dhafra, near Abu Dhabi, on Aug. 23, 2021. (Bertrand Guay/AFP via Getty Images)
Afghanistan

France will stop its evacuation efforts at the Kabul airport on Aug. 27, the country’s prime minister has announced.

“From tomorrow evening onward, we are not able to evacuate people from the Kabul airport,” French Prime Minister Jean Castex told RTL radio on Aug. 26.

The Dutch government said it expected to carry out its last evacuation flight out of Afghanistan on Aug. 26.

The United States and its allies have urged their citizens and visa holders to move away from the airport, citing the threat of terror attacks by the ISIS terrorist group.

UK Armed Forces Minister James Heappey said on the morning of Aug. 26 that there was a “very credible” threat of a “highly lethal” terror attack on Kabul airport within hours.

The threat is believed to have come from ISIS-K, or Islamic State Khorasan, an ISIS affiliate in Afghanistan that consists of disaffected Taliban members who hold an even more extreme view of Islam.

The group is said to be enemies of the Taliban, but it’s likely to have seen its ranks boosted by the Taliban freeing prisoners across the country.

“The Netherlands has been informed by the United States that it has to depart today and will most likely perform the last flights later today,” the Dutch government wrote in a letter to Parliament.

“This is a painful moment because it means that despite all the great efforts of the past period, people who are eligible for evacuation to the Netherlands will be left behind.”

The Dutch government said evacuees can no longer be assisted in and around the airport due to the security situation and are “strongly recommended not to come to the airport.”

“It is no longer safe to fly in or out of Kabul,” Denmark Defense Minister Trine Bramsen said.

Poland and Belgium ended their evacuations on Aug. 25.

“We cannot risk the lives of our diplomats and of our soldiers any longer,” said Polish Deputy Foreign Minister Marcin Przydacz.

Heappey said the UK has 11 more flights scheduled out of Kabul for Aug. 26, but declined to say whether that will be the end of the operation, citing the security of troops on the ground.

Eight Royal Air Force flights managed to lift 1,988 people from Kabul within the past 24 hours, Heappey said on Aug. 26, taking the total since the Taliban began its march back to power to 12,279.

Reuters, The Associated Press, and PA contributed to this report.