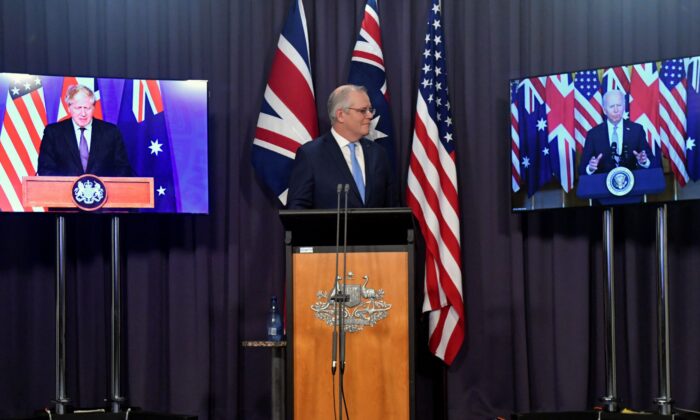 France is threatening to block discussions between the European Union and Australia on a free trade agreement after the Australian government rescinded a deal with Paris to purchase French submarines.

“So it is unthinkable to move forward on trade negotiations as if nothing had happened with a country in which we no longer trust,” Beaune said on Sept. 20.

As part of the new security alliance, which French officials apparently learned about just hours before U.S. President Joe Biden’s announcement, Australia will be supplied with technology to construct its own nuclear submarines. Previously, Australia struck a $65 billion deal with France to provide subs in a security agreement in the Asia–Pacific region.

While the European Commission has conducted trade talks, they’re unlikely to proceed if France, a key member of the EU and the commission, is opposed to them.

“One of our member states has been treated in a way that is not acceptable, so we want to know what happened and why,” von der Leyen remarked, saying that more details are needed “before you keep on going with business as usual.”

In response to Beaune’s comments, Australia’s trade minister, Dan Tehan, said he will meet with his French counterpart when he visits Paris next month. The next round of trade talks between the EU and Australia is scheduled for Oct. 12.

Tehan told Sky News Australia that “it’s just very much business as usual when it comes to our negotiations on that free trade agreement.”

But despite Tehan’s rosy outlook, German MEP Bernd Lange, head of the European Parliament’s international trade committee, said the trade deal appears unlikely to go through for other reasons than the derailed French submarine deal.

“The willingness to compromise, on the European side, has now certainly decreased,” Lange told Politico, adding that “in addition to Australia’s security policy orientation, the deal with the U.S. also sends industrial policy signals against the EU.”

“Industrial policy cooperation and technology transfer, which are part of the EU’s Indo–Pacific strategy, have become more complicated,” Lange said. “And there are clear differences with the U.S., especially in terms of sustainability and social responsibility—which, by the way, was part of the French–European offer for submarines.”