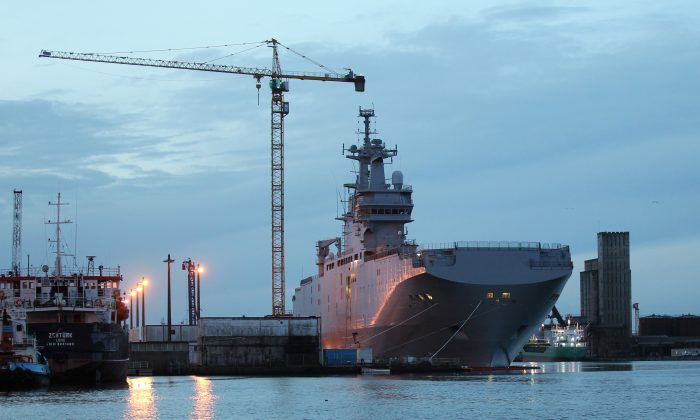 PARIS—France suspended the delivery of a warship to Russia on Tuesday, after months of speculation about what would be the biggest arms sale ever by a NATO country to the Kremlin.

French President Francois Hollande’s office announced the suspension “until further notice” after growing pressure from allies due to tensions over Russia’s actions in Ukraine. The decision exposes France to eventual fines for not fulfilling the contract.

The Vladivostok, meant for delivery this month, is docked at the French port city of Saint Nazaire, where about 400 Russian sailors have spent months training aboard the vessel.

A second French-made ship, named the Sevastopol, after a port on the Crimean Peninsula, was slated for delivery next year and recently arrived at the Saint Nazaire docks for finishing touches. Russia annexed Crimea from Ukraine in March.

Hollande had said in September that conditions weren’t right for a ship delivery given continued violence in Ukraine. Tuesday’s statement stopped short of cancelling the two-ship deal, suggesting the French government is reluctant to give up on a contract worth more than 1 billion euros ($1.24 billion) and thousands of jobs during an economic slump.

Russia’s ambassador to France told The Associated Press on Tuesday that there’s a grace period in the contract and Russia isn’t demanding any compensation for the delayed deal yet.

But when that period passes, Alexander Orlov said, “France will have to either hand over the ship or return the sum that we paid. That’s it.”

Suggesting that France suspended the deal under U.S. pressure, he said French-Russian relations are being held “hostage to political games that weren’t started by Russia or France, but which all countries of the EU and NATO have been pulled into.”

The Vladivostok can carry 700 troops, 16 helicopter gunships and up to 50 armored vehicles.

Analysts say the two warships would give Russia an enhanced ability to move large numbers of troops and equipment but were not game-changers for Moscow’s military.

From The Associated Press. Laura Mills in Moscow and Angela Charlton in Paris contributed to this report.