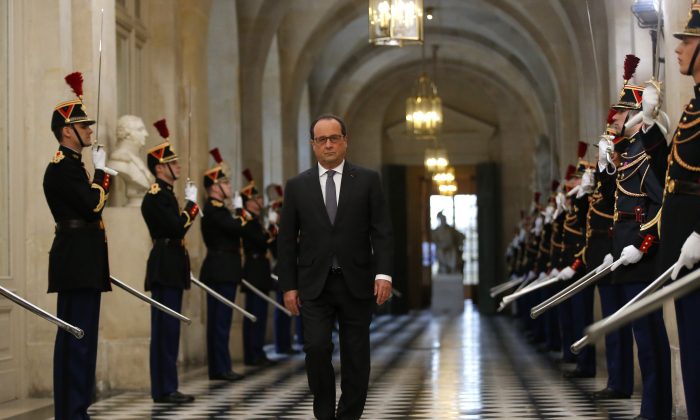 PARIS—France wants to bring the United States and Russia together in a grand coalition dedicated to smashing the Islamic State (ISIS), President Francois Hollande told lawmakers Monday in a rare joint session in the Palace of Versailles as authorities worldwide struggled to pinpoint those responsible for the deadliest attacks on French soil since World War II.

“The faces of the dead people, of the wounded, of the families don’t leave my mind,” Hollande declared after France and many allies observed a minute of silence in honor of the 129 killed and 350 wounded when ISIS attackers targeted a soccer stadium, a rock concert and four nightspots Friday with assault gun fire and suicide bombs.

“In my determination to combat terrorism, I want France to remain itself. The barbarians who attack France would like to disfigure it. They will not make it change,” Hollande pledged. “They must never be able to spoil France’s soul.”

However, he signaled a likely months-long security crackdown following security sweeps overnight in which police nationwide arrested 127 people and seized 31 weapons, including automatic firearms and a rocket launcher.

Hollande said he would present a bill Wednesday seeking to extend a state of emergency—granting the police and military greater powers of search and arrest, and local governments the right to ban demonstrations and impose curfews—for another three months.

He also pledged to hire 5,000 more police within the next two years, to freeze cuts in military personnel through 2019, and to introduce other bills that would stiffen jail terms for arms trafficking and make it easier to deport suspected terrorists.

In neighboring Belgium, the base for many of Friday’s attackers, police surrounded the suspected hideout of a man identified as a driver for the attackers, but came up empty after charging into the property. In Paris, officials identified the alleged mastermind of the attacks, a Belgian man who is believed to be beyond reach in Syria.

Earlier Monday, thousands clasped hands outside some of the bullet-riddled nightspots targeted Friday as children returned to school and city authorities vowed to resume normal life as quickly as possible.

In a symbolically powerful move, the Eiffel Tower reopened to tourists after a two-day shutdown. As darkness fell it was floodlit in the red, white and blue of the French tricolor along with a projection of Paris’ centuries-old motto of “tossed but not sunk,” suggesting an unsinkable city braving stormy seas.

Hollande said the United States and Russia needed to set aside their policy divisions over Syria, adding that he hoped to meet soon with President Barack Obama and Russian leader Vladimir Putin “to unify our strength and achieve a result that has been too long in coming.”

“We need a union of all who can fight this terrorist army in a single coalition,” he said.

As France intensified its airstrikes overnight on suspected ISIS power bases in Syria, police struggled to achieve a breakthrough in their hunt for militants who survived Friday’s assaults. Six blew themselves up with suicide belts while police shot to death a seventh. Iraqi officials said their intelligence agency suggested that 19 attackers and five back-up activists committed the carnage, an assertion not publicly supported by Western intelligence agencies.

France has issued an arrest warrant for 26-year-old Salah Abdeslam, who was identified as the alleged driver of a car that delivered attackers to the scene of greatest slaughter, a rock concert inside a nightclub in which 89 died. That car, rented by Abdeslam, was found abandoned on Paris’ east side with several assault rifles and ammunition clips still inside.

French border police had stopped him Saturday but unwittingly allowed him to travel on to Belgium, unaware of an arrest warrant that had been issued in Paris describing him as extremely dangerous.

Belgian police on Monday donned balaclavas and assault rifles as they mounted a tense hours-long standoff outside Abdeslam’s suspected hideout in the Brussels district of Molenbeek but made no arrests after storming the residence.

One of Abdeslam’s brothers, Brahim, blew himself up outside a Paris restaurant, killing one civilian, during Friday night’s attacks. Another brother, Mohamed, was detained by Belgian police but released without charge Monday. His lawyer, Nathalie Gallant, said that, unlike his two brothers, Mohamed Abdeslam “didn’t make the same life choice” and had not been “tempted into jihadism.”

Across France, police utilizing emergency powers said they raided 168 properties and detained 127 people, 104 of whom were placed under house arrest, in search of members of a suspected sleeper cell of ISIS activists.

French Interior Minister Bernard Cazeneuve said police seized a Kalashnikov assault rifle, three automatic pistols and a bulletproof vest from a suspected arms dealer with jihadist sympathies, and a rocket launcher and other military-grade gear from his parents’ home.

A French official, who spoke to The Associated Press (AP) on condition of anonymity, said police had identified the suspected mastermind as Abdelhamid Abaaoud, a Belgian national believed to be in Syria. He is featured in a 2014 video apparently taken in Syria boasting of carrying a cargo of slain “infidels” in the back of his vehicle.

The official, who has direct knowledge of the police investigation but is not authorized to speak publicly about the probe, said Abaaoud also is suspected of overseeing two thwarted attacks earlier this year on a Paris church and a Paris-bound train. The latter attack was stopped by American passengers who restrained a gun-toting man before he could open fire.

In hopes of killing ISIS organizers and trainees, France overnight launched its heaviest airstrikes yet on the city of Raqqa, the group’s de-facto capital in Syria. French authorities said Sunday night’s bombings destroyed a jihadi training camp and munitions dump.

The Defense Ministry said 12 aircraft based in Jordan and the Persian Gulf dropped a total of 20 bombs. It called the operation the largest attack by French air power since France joined the U.S.-led coalition in targeting suspected ISIS power bases in Syria in September.

Tantalizing clues about the extent of the plot have emerged from Baghdad, where senior Iraqi officials told the AP that France and other countries had been warned Thursday of an imminent attack.

An Iraqi intelligence dispatch warned that ISIS leader Abu Bakr al-Baghdadi had ordered his followers to launch gun and bomb attacks immediately and take hostages inside those countries involved in bombing ISIS positions in Iraq and Syria. The Iraqi dispatch, obtained by the AP, provided no details on when or where the attack would take place.

However, Iraqi intelligence officials told the AP they provided other details to France, including that attackers had been trained specifically for Friday’s attack and were deployed from Raqqa.

The officials also said a sleeper cell in France met the attackers and helped them to plan Friday’s assaults. They said 24 people were involved: 19 attackers and five who provided logistics and planning.

None of those Iraqi details have been corroborated by officials from France or other Western intelligence agencies. All spoke on condition of anonymity, citing the ongoing investigation.

Also Monday, a Turkish security official told the AP that a group of ISIS activists arrested last week in Istanbul had communicated with the Paris attackers before Friday’s massacres.

The official, who spoke on condition of anonymity because he wasn’t authorized to speak on the record, said police arrested more than six suspects Thursday at a luxury villa in suburban Istanbul, including Aine Lesley Davis, a British national linked to the high-profile ISIS figure nicknamed Jihadi John. The U.S. military said it killed Jihadi John in a Syrian drone strike Friday.

In Paris, harrowing accounts of survival continued to emerge, particularly from the Bataclan theater, where three attackers shot into the fleeing crowd. Two then detonated suicide vests as police stormed the building, fatally shooting the third attacker.

Julien Pearce, a journalist at Europe 1 radio who escaped by crawling onto the Bataclan stage, said he got a good look at one attacker who appeared “very young.”

Paris remains on edge amid three days of official mourning. French troops have deployed by the thousands in support of police to restore a sense of security in one of the world’s most visited cities. But any sound of loud bangs can send people scurrying for cover.

“Whoever starts running starts everyone else running,” said a city councilwoman, Alice Carton, who was at the square. “It’s a very weird atmosphere. The sirens and screaming are a source of fear.”