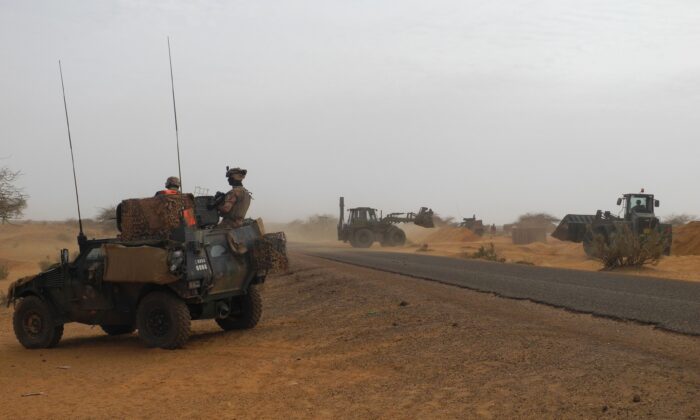 Two soldiers of the counter-terrorism Barkhane mission in Africa's Sahel region patrol aboard a Light Armored Vehicle (LAV) to observe the construction of the new French base in Gossi, center Mali, on March 25, 2019. (Daphne Benoit/AFP via Getty Images)
Europe

France Says It Has Killed ISIS-GS Leader, a Former al-Qaeda Leader, in Africa

The French military has killed a leader of the ISIS-affiliate group ISIS in the Greater Sahara (ISIS-GS), French President Emmanuel Macron announced late on Sept. 15.

ISIS-GS leader Adnan Abu Walid al-Sahrawi was “neutralized by French forces,” Macron wrote on Twitter, according to a translation.

“This is another major success in our fight against terrorist groups in the Sahel,” he wrote. “The Nation is thinking this evening of all its heroes who died for France in the Sahel in the Serval and Barkhane operations, of the bereaved families, of all of its wounded. Their sacrifice is not in vain. With our African, European, and American partners, we will continue this fight.”

According to the Counter Extremism Project, an international nonprofit working to combat the growing threat of terrorism and extremist ideology, al-Sahrawi was formerly the self-proclaimed leader for the al-Qaeda-linked terrorist group “The Sentinels” (“al-Mourabitoun”) in the Sahara. In May 2015, he pledged allegiance to ISIS’s Abu Bakr al-Baghdadi and split to form ISIS-GS.

Al-Sahrawi was designated a global terrorist by the United States after he claimed responsibility for a 2017 terror attack in Niger that killed four U.S. military personnel, as well as four soldiers from Niger’s military.

His group has also abducted foreigners in the Sahel region of West Africa, and is still believed to be holding American Jeffrey Woodke, who was taken from his home in Niger in 2016.

The terrorist was also responsible for ordering the killing of six French aid workers and their Nigerien drivers in August 2020, according to Macron’s office.

“It is a decisive blow against this terrorist group. Our fight continues,” she wrote, according to a translation of her Twitter post.

It’s unclear where al-Sahrawi was killed, although the ISIS group is blamed for most of the attacks along the border between Mali and Niger.

Macron announced in June that he would reduce the number of French troops in the Sahel, to ultimately halve the then 5,100-member Barkhane force.

Macron said that while there will still be a military presence in the Sahel region to help African allies fight groups linked to ISIS and al-Qaeda, France is seeking to shift some of its focus toward counterterrorism operations and the strengthening and training of local forces.