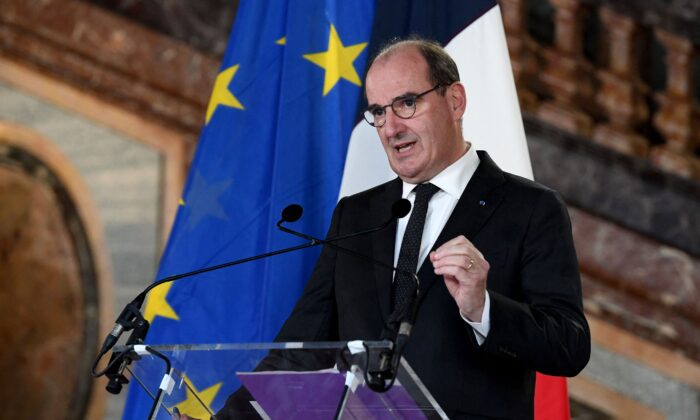 France's Prime Minister Jean Castex speaks during a joint press conference with his Belgium counterpart after a bilateral ministerial meeting in Brussels, on Nov. 22, 2021. (John Thys/AFP via Getty Images)
Europe

France has formally rejected the UK government’s call for joint patrols on the French coast to prevent illegal immigrants from crossing the English Channel in small boats.

In a letter to British Prime Minister Boris Johnson, French Prime Minister Jean Castex said his government “cannot accept” the presence of British personnel because it would compromise French sovereignty.

It was a response to a request made by Johnson last week for the two countries to “go further and faster together” to deal with the illegal immigration crisis in the English Channel, following the sinking of a boat carrying illegal immigrants on Nov. 24 with the loss of 27 lives.

Johnson called on Paris to take back the illegal immigrants and allow British border officials to patrol jointly with their French counterparts on the beaches of northern France.

In his letter, Castex wrote: “We have always accepted to examine and discuss in good faith British proposals of reinforcement and cooperation. We have accepted some, we have declined others.”

“We cannot accept, for example, that British police officers or soldiers patrol our coasts. It comes from our sovereignty,” the letter said, according to French newspaper Le Monde.

The French prime minister said more than 700 police officers and gendarmes were already covering the area around Dunkirk and Calais to prevent small boats carrying illegal immigrants from taking to the water.

But he said these efforts “only permit us to contain the phenomenon, not to bring a lasting response.”

Castex suggested that, instead of blaming France for the crisis, the UK must do more to make itself less attractive to illegal immigrants.

“Indeed, much of the solution does not lie in France, but in the UK. Indeed, only you can dissuade migrants who do not intend to settle there from coming to your territory by implementing a more effective return policy,” said the letter, according to The Daily Telegraph.

“Only you can weaken the channels of irregular immigration by opening legal immigration channels to those who have legitimate reasons for wanting to come to your country. Only you can ensure that your labour market is sufficiently controlled to discourage applicants for illegal work,” he wrote.

In response to the letter, a UK government spokesman said: “Last week’s devastating events were a tragic reminder of the dangers of these crossings and like our French neighbours the UK government is determined to prevent further loss of life in the Channel.

“We stand ready to discuss all options in the spirit of our close cooperation and partnership, and as a shared, global challenge it is vital we address illegal migration collectively and urgently.”