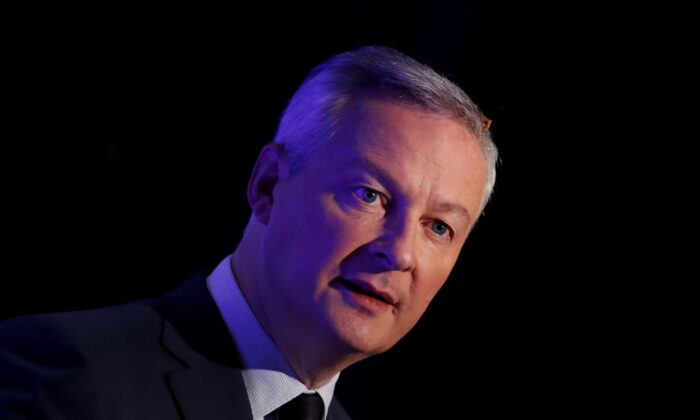 French Finance Minister Bruno Le Maire said Friday that France is opposed to a U.S. proposal this week that would let companies opt out of proposed amendments to the international tax system.

Treasury Secretary Steven Mnuchin has suggested that the first set of global tax reforms, put forward by the Organization for Economic Cooperation and Development (OECD) and known as “Pillar One” (pdf), would operate as a “safe harbor regime.”

Mnuchin’s calls for the opt-out came in a letter made public on Wednesday (pdf) in which the nation’s point man on finance raised “serious concerns” about some of the tax reform proposals put forward by the OECD, a 36-member group including the United States that has been discussing ways to arrive at a consensus on a “unified approach” to international tax rules.

Many of the OECD countries are considering fixes to the international tax code that allow digital products to go untaxed by letting companies book revenues in low-tax countries like Ireland, regardless of where the paying customer lives.

Le Maire said that Mnuchin’s “safe-harbor regime” proposal for the Pillar One reforms would mean U.S. companies could opt in or out as they pleased, which he said would be unacceptable to France and other OECD countries.

He urged Washington to negotiate on the basis that the new tax rules be binding, and said if the efforts at the OECD fell through, EU countries should revive talks for a European digital tax.

In a letter to Mnuchin, Gurria said that despite the lengthy consultations that had already taken place around the global tax reforms, the OECD “had so far not come across the notion that Pillar 1 could be a safe-harbour regime.”

“We raise this concern, as it may impact the ability of the 135 countries that are now participating in this process, to move forward within the tight deadlines we established collectively,” he wrote.

Gurria also invited Mnuchin to come to Paris for a meeting “ideally before Christmas,” in order to help the OECD find the best path forward.

In his letter to the OECD Secretary-General, Mnuchin expressed opposition for unilateral digital services taxes, which the administration has argued would disproportionately impact American tech companies like Amazon, Apple, Facebook, and Google.

“We urge all countries to suspend digital services tax initiatives, in order to allow the OECD to successfully reach a multilateral agreement,” he wrote.

“So it’s either going to work out, or we’ll work out some mutually beneficial tax,” Trump added. “And the tax will be substantial. I’m not sure it’s going to come to that, but it might.”

The United States has threatened to impose 100 percent tariffs on a raft of French products, including Champagne, cheese, and handbags, over France’s digital services tax.

The U.S. Trade Representative (USTR) on Monday found that France’s digital tax is “unreasonable, discriminatory, and burdens US commerce” and proposed tariffs on $2.4 billion in French products.

Lighthizer added that the USTR is “focused on countering the growing protectionism of EU member states, which unfairly targets U.S. companies.”

“It may be that the administration is thinking, ‘We need to pressure France to make sure the others don’t follow along,’” said Simon Lester, a trade expert at the Cato Institute, in comments to Foreign Policy.

The USTR said that it also considering opening investigations into digital services taxes in other countries.