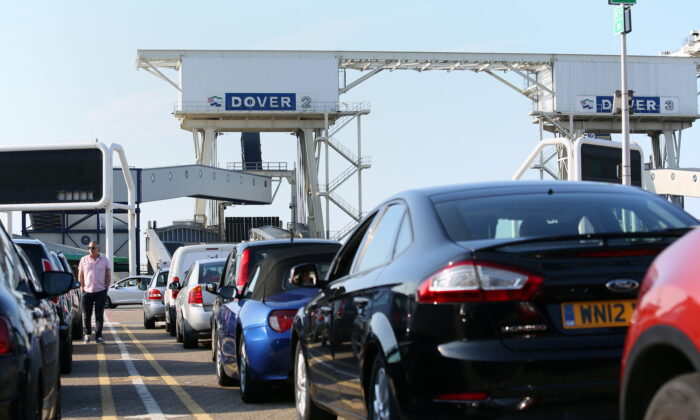 France has banned UK nationals from travelling by car across the country to homes in other E.U. nations. (Philip Toscano/PA)
UK

France has lifted a transit ban on British nationals with E.U. residency, meaning E.U.-based UK citizens spending Christmas in Britain are now allowed to pass through France to return to their homes in the E.U.

France has banned all non-essential travel from the UK since Dec. 18 in a bid to limit the spread of the Omicron variant of the CCP (Chinese Communist Party) virus.

On Thursday, the UK Foreign, Commonwealth, and Development Office (FCDO) updated its travel advice for France to state: “The French government have indicated that UK nationals travelling from the UK who are not resident in France will not be permitted to transit France to return to their country of residence unless they are travelling by air.”

The new rule effectively created a ban on travellers attempting to return to any E.U. country other than France by Eurotunnel, Eurostar trains, or ferry, and would affect those who planned to avoid air travel to return to their homes in the E.U. after spending Christmas with friends and relatives in the UK.

But later on Thursday, the French government announced a reversal to the policy.

The AFP news agency quoted a French interior ministry spokesman as saying: “A large number of British nationals residing in an E.U. country have travelled in good faith to the UK for the festive season and are experiencing difficulties in reaching their country of residence.

“Faced with this situation, instructions of tolerance have been sent to police officers at the borders with the United Kingdom, in order to allow these nationals to transit through France to reach their residence in a country of the European Union, after this Christmas and New Year period.”

A UK government spokesman said: “The French authorities have confirmed that British nationals will face no additional restrictions while travelling through the holiday period. British nationals who are currently in the UK, but resident in the E.U., will be able to return to their home through France over the New Year period without disruption.”

The spokesman said the UK government remains “in close contact with the French authorities” on the matter.

Despite the policy reversal, most UK residents are still banned from going to France unless they have a “compelling reason.”

Meanwhile, the German embassy in London said on Thursday that Germany will lift a ban on UK tourists entering the country from Jan 4.

UK Transport Secretary Grant Shapps described the move as a “welcome development from our German colleagues.”