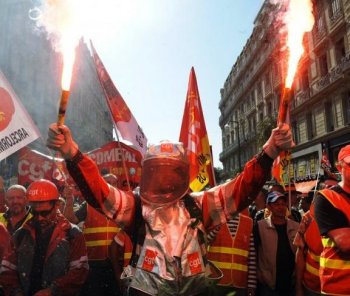 Epoch Times Staff
View profile
Follow
biggersmaller
Print
Unions organized hundreds of parades and strikers took to the streets in France on Sept. 23, protesting against President Nicolas Sarkozy’s proposal to raise the retirement age from 60 to 62.

Estimates over the number of participants nationwide differed between the police (one million) and the unions (three million); in Marseille their figures also differed by a factor of ten (22,000, the police said; 220,000, the protesters said). Whatever the precise figures, Le Monde reported that they were less than those of Sept.7.

More than half of the Metro in Paris was closed, half of the long-distance trains were cancelled, and some flights were grounded at Paris airports, AP reported.

Between a quarter and a half of all teachers went on strike.

A recent poll suggested 60 percent of the population oppose Sarkozy’s bill, and 63 percent support the strikers. Unions and opposition groups have said the age of 60 for retirement is one of the essential parts of the French way of life.

Sarkozy’s amended bill passed Parliament and will be debated in the Senate on Oct. 5.

On Friday unions will decide whether they will protest on the weekends before and after the Senate decision.

The modest increase, from 60 to 62, would still make France’s retirement age one of the lowest in the world.