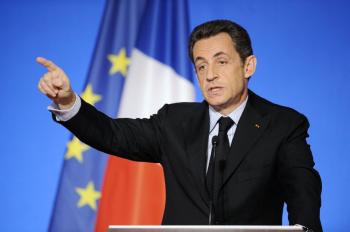 French President Nicolas Sarkozy gestures as he speaks during a press conference on Dec. 14 in Paris, unveiling details of a 35 billion euro national loan to fund a public-spending spree. (Eric Feferberg/AFP/Getty Images)
Europe

Dubbed the “Grand Loan,” the 35 billion euro (US$50 billion) spending plan adopts almost all the recommendations made in November by a commission headed by former Prime Ministers Alain Juppé and Michel Rocard.

Arguing that French governments over the last 30 years have “repeatedly sacrificed investments,” Sarkozy said the massive spending was needed for the country to “fully benefit from the economic recovery, so that it can become stronger, more competitive, and create more jobs.”

It is not “yet another plan” Sarkozy said, but a clear roadmap and a long-term investment strategy. “It can contribute to help us out [of the financial crisis],” he said, but that even without the crisis, a similar plan would have been needed.

To Sarkozy, the national loan is of the same caliber as the Marshall plan that rebuilt the economies of Western Europe after World War II, and the nuclear development plan of General de Gaulle in the 1960s.

The lion’s share will go to French universities, with the aim to create five to ten “campuses of excellence.” “The truth is that France has for too long neglected its higher education system, whereas here is the key to future … [competiveness],” Sarkozy said.

“Our aim is now straightforward: We want the best universities in the world.” Currently only 23 French universities make it to the top 500 in the world. The highest-ranked of them, Paris VI University, ranks only 40th.

Future “campuses of excellence” will be selected after a national tender in 2010 and receive part of the funds as proprietary capital, with the condition that only the interest generated by the capital be allowed to be spent.

One billion euro will be made available immediately to build a major campus on the Plateau de Saclay, south of Paris, which is host to such prestigious institutions as École Polytechnique and École Centrale Paris.

The national loan will be fed by a 22 billion euro loan to international markets. The remaining 13 billion will come from the reimbursement of money borrowed by French banks that got them safely out of the financial crisis.

President Sarkozy anticipated that “such public investment should leverage on private- sector initiatives,” and that a total of 60 billion euro could therefore become available, including future contributions from the private sector through the stimulation of public and private partnerships in research and development.

Given this expected private-sector return, biotechnology and health care are set to receive 2.5 billion euro, and 3.5 billion will be put aside for intellectual property and technology transfer.