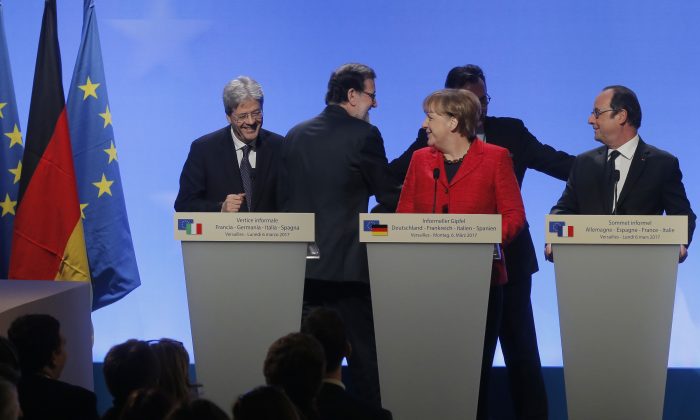 PARIS—Leaders of France, Germany, Spain and Italy have called for a European Union which allows groups of member states to advance at their own pace, in a joint effort to cushion the impact of the Brexit.

French president Francois Hollande hosted his counterparts on Monday evening in Versailles, near Paris, to prepare for a larger EU meeting later this week.

“Europe must be able to draw the consequences of the Brexit”, he said in a joint statement with the other leaders of the European Union’s major economies.

Hollande has pointed to the creation of a European defense that would operate in coordination with NATO as a priority.

In an interview published Monday in six European newspapers, he warned against the risk of implosion of the European Union.

“We must have the courage to accept that some countries can move forward a little more quickly than others,” German Chancellor Angela Merkel said. She insisted other member states should be able to join the more advanced ones when they are ready.

The leaders also called on the EU to form new policies to protect its borders, handle the refugee crisis and improve the fight against terrorism.

Britain is expected to launch negotiations by the end the month on the terms of its exit from the bloc.

The European Commission foresees five possible scenarios for Europe by 2025: to carry on as usual; function as a single market only; do less but be more efficient; allow groups of member states to advance at their own pace; or do far more together.