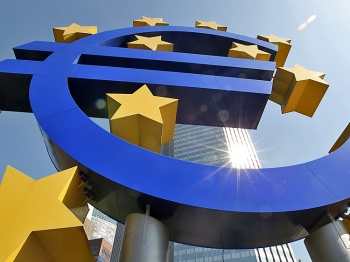 The logo of the European currency Euro stands in front of the European Central Bank (ECB) in Frankfurt/M., western Germany, on April 7. The EU economy has posted an impressive 0.8 percent growth in the first quarter of 2011. (Daniel Roland/Getty Images)
Business & Economy

‘The eurozone is therefore significantly outperforming all other major developed economies at the moment," said Chris Williamson, chief economist at Markit, a financial information firm, in a statement.

This impressive growth is the result of Germany fueling up the rest of the pack with its higher exports. Germany had a GDP increase of 1.5 percent in the first quarter compared to the fourth quarter of last year, and grew 4.8 percent compared to the first quarter in 2010. German exports rose to a record high by 7.3 percent in March—the highest export growth since 1950, when first records began. German unemployment is enjoying 19-year low of 7.1 percent.

Last week Bayerische Motoren Werke AG (BMW) posted its best-ever profits, as it earned more money per car than ever before in its 95-year history. As a result, BMW management issued a one-time bonus on average of 5,840 euros (US$8,230) to every employee.

Germany’s growth figures are “fantastic,” said Alexander Krueger, who is the head of capital markets analysis at Bankhaus Lampe KG in Dusseldorf. “We expect full-year growth of more than 3 percent. The skies are blue right now for the German economy,” he added.

“If anything, the risks for German growth are on the upside,” said James Nixon who is the chief European economist at Societe Generale SA in London, according to Bloomberg. “Germany has done its homework, has put in place some painful reforms and is benefiting now.”

France Not Far Behind

The U.S. economy grew 0.4 percent in the first quarter, which explains a much weaker dollar. The euro has been on a tear against the weak dollar in recent months.

Due to EU’s robust growth, the European Central Bank (ECB) was forced to increase borrowing costs, raising the interest rate to 1.25 percent from 1.0 percent. That is despite the fact that Greece and Portugal are still experiencing severe financial crises.

Although Greece has grown 0.8 percent in the first quarter, its fiscal situation is still quite unstable and is currently awaiting another rescue package of 60 billion euros. Standard & Poor’s rating agency had cut Greece’s credit rating last week by two levels to B from BB-, with further cuts possible in the near future.

Portugal is the loser of the pack with the worst negative growth of -0.7 percent in the first quarter. It is currently awaiting a rescue package of 78 billion euros (US$110 billion), making it already the third EU country behind Greece and Ireland to ask for a lifeline. With the bailout fund in hand, Portugal is given a target to reduce its budget deficit from 7.3 percent to 5.9 percent of GDP in 2011, 4.5 percent in 2012, and 3 percent in 2013.