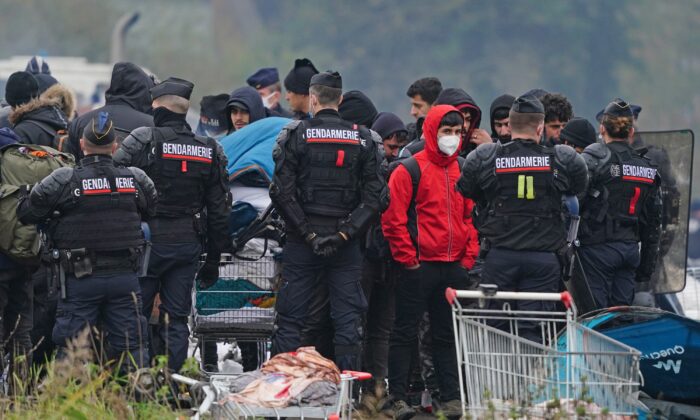 Migrants at a makeshift camp on the site of a former industrial complex east of Dunkirk, France, on Nov. 16, 2021. (PA)
UK

France has rejected a British claim that Home Secretary Priti Patel and her French counterpart Gerald Darmanin agreed to work to prevent “100 [percent] of crossings” of the English Channel.

The Home Office issued a joint statement from the pair which said they had agreed on measures to “stop the dangerous crossings” of the “deadly route.”

But the French embassy in London said the 100 percent figure “should not be presented as an agreed figure.”

Patel and Darmanin held talks on Monday night with the UK and France involved in a long-running row over how to address the problem of illegal immigrants seeking to cross the Channel.

“More must be done to stop the dangerous crossings.

“They agreed to accelerate the delivery of the commitments made in the joint agreement of July 2021 to deliver on their joint determination to prevent 100 [percent] of crossings and make this deadly route unviable.”

But the French embassy said on Twitter: “For the record, the 100 [percent] figure was not agreed between the Home Secretary and French interior minister @GDarmanin and should not be presented as an agreed commitment: it is not.

“And it is not part of the joint statement.”

However, in a press conference on Oct. 9, Darmanin said that with the correct resources and the support of the British authorities, 100 percent should be able to be reached.