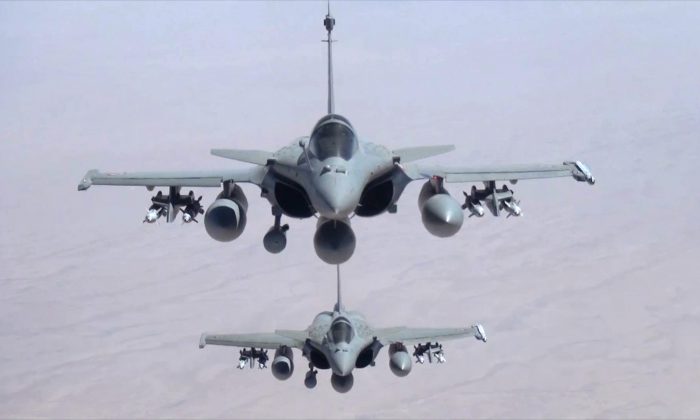 France has reaffirmed its role as a Pacific power after the French Armed Forces completed a demonstration of long-distance air power projection.

The force projection, code-named Mission Pégase 22, saw a contingent of the French Air Force travel from Paris to New Caledonia in just 72 hours, more than 16,600 kilometres (10,315 miles), demonstrating France’s ability to engage in possible conflict in the Pacific.

The contingent was made up of three Rafale jets and support aircraft.

“The fact that we are trying to do such air power projection in the Pacific is a concrete illustration” of the French resolve to ensure the sovereignty of their territory is protected, according to Maj. Gen. Stephane Groen, chief of staff of the French Air and Space Force’s Air Operations Command and commander of the drills, the Nikkei Asia reported.

“We are a country of the Indo-Pacific. If you take the number of citizens we have in the Pacific and Southwest Asia, we have more than 2 million people, and our exclusive economic zone is around 9 million square kilometres,” Groen said.

The mission also signals a new era of high-level interoperability between France and India, who both fly Rafale jets following the signing of a reciprocal logistics support agreement in 2018.

Emmanuel Lenain, the French ambassador to India, lauded the exercise, saying that it demonstrated France’s commitment to its Indo-Pacific territories.

“France is a resident power of the Indo-Pacific, and this ambitious long-distance air power projection demonstrates our commitment to the region and our partners. It is only natural that to carry out this mission, we rely on India, our foremost strategic partner in Asia,” Lenain said. “My heartfelt thanks to the Indian Air Force for welcoming the French contingent.”

In a media statement, the French Embassy in India said Mission Pégase 22 was a “powerful demonstration of France’s capacity for quick deployment in the Indo-Pacific.”

“The mission is also proof that the security situation in Europe has not diminished the French and European commitment in the Indo-Pacific,” the statement reads.

The French show of force comes amid ongoing concerns about Beijing’s influence push in the region.

Europe Engaging More in the Pacific

This follows the announcement by NATO Secretary-General Jens Stoltenberg that the organisation would increase engagement in the region to counteract ongoing aggression and militarisation from Beijing.

Read More
NATO to Engage in Asia-Pacific to Counter China

Michito Tsuruoka, an associate professor of international security and European politics at Japan’s Keio University, said re-engagement in the region was a good strategy for European powers.

In an article for The Diplomat in 2021, he said that if other allies focus on different threats and challenges in various theatres of conflict, then there’s a more significant potential for it to lead to “wider perception gaps,” making it difficult to “work together on broader issues like China, or Russia.”

“Geographical distance can no longer be a shield for Europe to protect itself from the consequences of China’s behaviour,” Tsuruoka said.