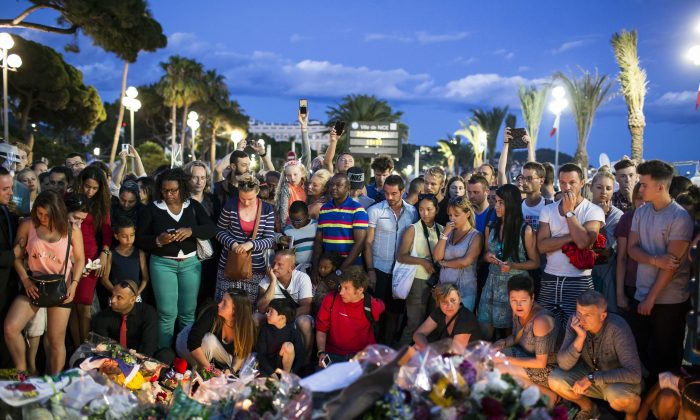 People gather at a makeshift memorial to honor the victims of an attack, near the area where a truck mowed through revelers in Nice, southern France, on July 15, 2016. (AP Photo/Laurent Cipriani)
Europe

NICE, France—The rogue driver who turned a night of fireworks and fun into the worst carnage the French resort city of Nice has seen in decades appeared aloof and menacing to his neighbors and family, while authorities said Saturday that he had recently turned to religious extremism.

The Islamic State group claimed Mohamed Lahouaiej Bouhlel as one of its “soldiers” on Saturday, but what little is known so far about the 31-year-old Tunisian suggests a troubled, unpleasant person who showed little outward interest in Islam.

Bouhlel was born in Msaken, a town in Tunisia, but moved to France years ago and was living in the country legally, working as a delivery driver. At one point he married, and later moved to an apartment bloc in the Quartier des Abattoirs—the Slaughterhouse District—on the outskirts of Nice.

Neighbors described the father of three as a volatile man, prone to drinking and womanizing, who was in the process of getting a divorce.

“I saw him four times a day,” said Jasmine Corman, who has lived in Bouhlel’s pale yellow apartment building for six months. “He wasn’t very nice. … He was handsome, but his face was miserable.”

Back in Tunisia, Bouhlel’s father said his son was prone to violent episodes during which “he broke everything he found around him.”

“Each time he had a crisis, we took him to the doctor, who gave him medication,” Mohamed Mondher Lahouaiej Bouhlel told BFM television, even showing journalists what he said was a document about his son’s psychiatric treatment.

Bouhlel said his son hadn’t visited Tunisia in four years and hadn’t stayed in contact with his family.

“What I know is that he didn’t pray, he didn’t go to the mosque, he had no ties to religion,” said the father, noting that Bouhlel didn’t respect the Islamic fasting rituals during the month of Ramadan—an account seconded by neighbors in Nice.

Bouhlel had had a series of run-ins with the law in France for threatening behavior, violence and theft over the past six years. In March, he was given a six-month suspended sentence by a Nice court for a road-rage incident in which he attacked another driver with a wooden pallet.

His court-appointed lawyer, Corentin Delobel, said he observed “no radicalization whatsoever” of Bouhlel and Paris prosecutor Francois Molins said Bouhlel was never placed on a watch list for radicals.

But hints of a sudden turn to religious extremism began to emerge Saturday. After the Islamic State group claimed Bouhlel as one of their own, Interior Minister Bernard Cazeneuve said told reporters the driver had been “radicalized very quickly,” citing information from the five people taken into custody following the attack.

The chronology of Bouhlel’s last night is still being pieced together.

Records show the 19 metric ton (21 U.S. ton) truck that he rammed through the seaside crowd in Nice was rented in the outskirts of the city on July 11 and was overdue on Thursday, the night of the attack.

About 25 minutes before the July 14 fireworks show—which commemorated Bastille Day, France’s national holiday—Bouhlel drove toward the city center. Shortly after 10:30 p.m., he reached the Promenade des Anglais, driving up on the sidewalk to avoid the police cars blocking the road. He then took aim at the thousands who had gathered to watch the fireworks show, killing at least 84 people and wounding over 200.

Witnesses described seeing Bouhlel purposely steer the truck to hit families as they tried to flee.

“It was such a nice atmosphere before this started,” recalled Sanchia Lambert, a tourist from Sweden who had come to visit family in Nice. “There were people playing drums, kids riding their bikes. That makes what happened all the worse.”

Her husband, John Lambert, said the couple was almost struck by Bouhlel’s truck.

“I saw his face,” Lambert told The Associated Press. “He was totally focused.”