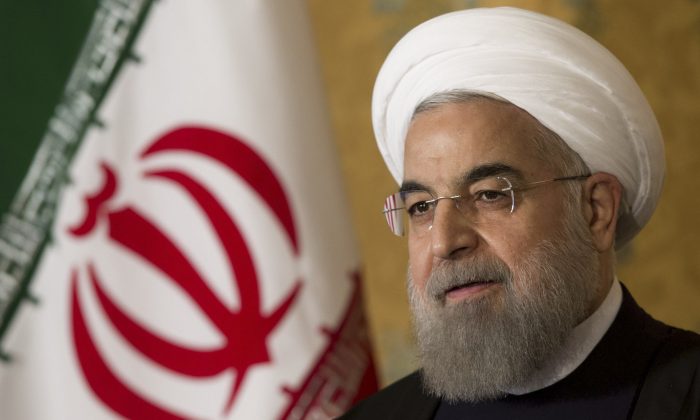 Iranian President Hassan Rouhani at a press conference at a hotel in Rome on Jan. 27, 2016. Rouhani leaves Rome later today for Paris, his second stop of his four-day visit to Europe, the first by an Iranian president in almost two decades. (Claudio Peri/ANSA via AP)
International

PARIS—France has asked its European Union partners to consider new sanctions on Iran for its recent missile tests, officials have told The Associated Press, even as Paris welcomed the president of the Islamic Republic, which is flush with funds from the lifting of other sanctions over Tehran’s nuclear program.

The ambiguous signals emerging Wednesday from France came as President Hassan Rouhani, a relative moderate elected in 2013, signed billions of dollars in business deals on an earlier stop in Italy and met with Pope Francis in the first such Iranian foray into Europe since 1999.

France hopes for similarly lucrative deals during Rouhani’s two-day visit, along with regional peacemaking efforts as the once-pariah state emerges from decades of isolation.

But amid the courting of Iran, two officials from EU nations told AP that the request for new sanctions came shortly after the EU and the U.S. lifted sanctions on Tehran on Jan. 16 in exchange for U.N. certification that Iran had scaled back its nuclear programs. Iran said those programs were peaceful but critics feared it wanted to build nuclear weapons.

The two officials said the French request came after the United States had imposed new sanctions on Iran over the firing of a medium-range ballistic missile.

The two officials said the French proposal is formally under EU review, but most other EU members view it as counterproductive to efforts to revive political and economic ties with Iran after the long chill over the nuclear dispute. The officials, who were briefed on the issue, spoke on condition of anonymity because they were not authorized to discuss the issue publicly.

The French government did not respond to AP requests for comment by late Wednesday. In an email to AP, the European Union also did not address whether France had asked for a review.

A French diplomat who spoke only on condition of anonymity because he was not authorized to talk publicly on the topic cited Foreign Minister Laurent Fabius as saying the EU is reviewing the possibility of new sanctions on Iran. He declined to say which nation initiated the process.

Disclosure that the French asked for such a review—even if it is ultimately unsuccessful—could complicate Rouhani’s low-key visit. About 20 accords between companies and ministries were to be signed Thursday, the French president’s office said.

Paris also wants to draw Tehran into a role as peacemaker in a Middle East that is fraught with civil war in Syria, where Iran has played an active role in support of President Bashar Assad, and in Yemen.

There was little fanfare in France for the new era being ushered in for Iran as Rouhani works to help his nation of 80 million emerge from isolation and raise its profile in the West, balancing ties with Russia and China. His Paris visit will be marked by a two-hour meeting with President Francois Hollande and ministers.

Tensions recently escalated with Saudi Arabia breaking ties with Iran after its embassy in Tehran was mobbed by crowds protesting the execution in Saudi Arabia of a prominent Shiite cleric and opposition figure.

France is trying “to ease tensions by speaking to everyone, which is our vocation,” said a ranking French diplomat ahead of Rouhani’s arrival. He was not authorized to speak publicly about the visit and asked to remain anonymous.

Iran’s human rights record, including hundreds of executions, adds another note of caution for France which presses for the abolition of the death penalty worldwide.

For its part, Iran could raise the issue of France harboring the headquarters of the most organized Iranian opposition group, the People’s Mujahedeen of Iran—which planned a Thursday demonstration against Rouhani.

Both countries clearly are opting for pragmatism.

Rouhani was expected to oversee the signing of contracts, including a possible deal with Airbus to renew Iran’s fleet of passenger jets. Iran’s aviation industry has suffered under sanctions in the past three decades, and of 250 commercial jetliners, only about 150 are flying.

Oil giant Total, engineering group Alstom and carmakers PSA Peugeot-Citroen and Renault-Nissan, with a past presence in Iran, are among companies that could clinch deals, too.

France showed its eagerness to take up where it left off in Iran as soon as the July nuclear deal was signed. Fabius visited Tehran, as did an important delegation of France’s main business group, known as Medef, where Rouhani will address business leaders Thursday.

Rouhani was originally scheduled to visit Paris in November, but the trip was called off after Nov. 13 Islamic extremist attacks that killed 130 people.

Rouhani said he and Pope Francis discussed the need for religious leaders to speak out against extremism and terrorism during their audience Tuesday. But in an apparent reference to the French satirical newspaper Charlie Hebdo, attacked by extremists a year ago for lampooning the Prophet Muhammad, Rouhani said freedom of expression “doesn’t mean offending that which is sacred to other people’s faith.”