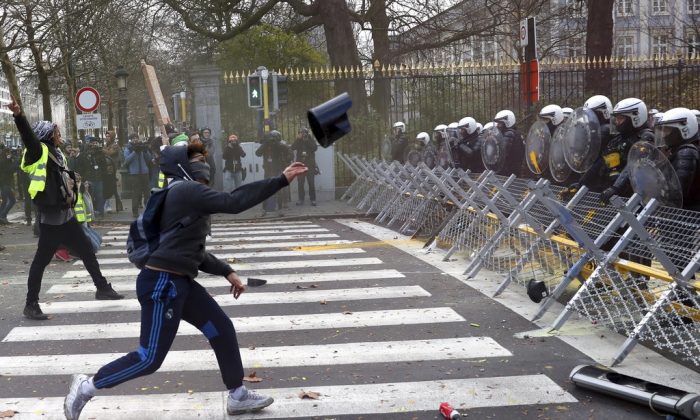 A protestor throws an object at a police line during a demonstration in Brussels on Dec. 8, 2018. (AP Photo/Francisco Seco)
Europe

France’s interior minister says the protest violence in Paris is “under control” despite scattered tensions but is calling it “totally unacceptable.”

Casataner estimated there were 10,000 yellow vest protesters in Paris on Dec. 9, among some 125,000 protesters around the country.

Protesters smashed store windows and set fires around Paris and clashed with police, who fired tear gas throughout the day in the French capital.

Dozens of French riot police backed by an armored vehicle are charging protesters on the Champs-Elysees in Paris, firing tear gas beneath the sparkling lights of one of the world’s most elegant avenues.

Demonstrators in yellow vests carried a huge banner calling for President Emmanuel Macron to resign and for France to hold an emergency election.

Protesters appeared to throw flares as police responded with tear gas. The confrontation came after a day of tension across Paris on Dec. 9 and unprecedented police efforts to prevent new violence.

The yellow vest movement started as a protest over a fuel tax rise but has expanded into an amorphous protest movement that French authorities are struggling to contain.