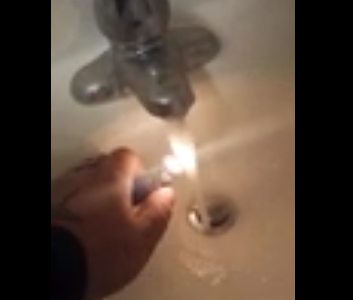 Jacob Haughney, who uploaded the video to YouTube, says that he works in oil fields in the state.

The video shows him holding a lighter near water running from a faucet, which catches on fire several times.

“Really wierd, right?” he said. “The first time I did it it exploded into a huge fireball which took up the entire sink.”

Flammable water that allegedly stemmed from fracking was highlighted in the film “Gasland,” which in part sparked protests against the drilling and oil generating practice across the United States.

Some people say the link isn’t so clear between the two, though, such as journalist Phelim McAleer, who made a film called “FrackNation,”

McAleer said that residents in the neighborhood of the man who was seen in “Gasland” had been able to light tap water on fire since the 1930s because of naturally occurring methane.

Other families, though, have said they’ve found their tap water has become flammable because of fracking.

“Especially in the morning, you come in and turn the water on and there is so much air pressure in the lines that is just blows water everywhere, you’re soaked,” Sarah Evans, who was visiting her parents in Dixie, Louisiana in December, told KSLA.

When she went to her brother’s house next door and lit the water on fire, it blew up and caught the fringe of the curtains, she added.

John Parker, one of the parents, says they believe it’s from fracking.

This only started once they started drilling those wells,” Parker said.