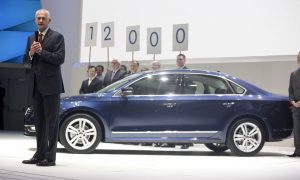 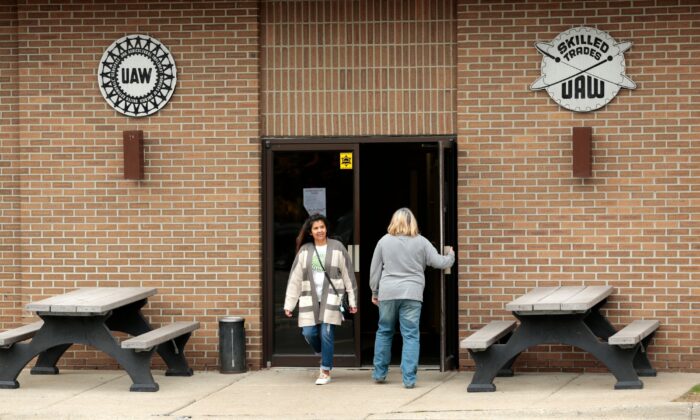 United Auto Workers (UAW) members walk outside of UAW Local 5960 as they vote in Lake Orion, Michigan, as they strike against General Motors on October 25, 2019. (Jeff Kowalsky/AFP via Getty Images)
US News

Two Republicans on the House Education and Labor Committee told the panel’s Democratic chairman on Nov. 14 that the corruption scandal at the highest ranks of the United Auto Workers union is deepening and it’s time for a congressional hearing on the situation.

“In the time since our original letter was sent to you, the current and previous presidents of the UAW have been accused by federal prosecutors of conspiring to embezzle more than $1 million in union dues,” Reps. Virginia Foxx of North Carolina and Tim Walberg of Michigan told the committee’s chairman, Rep. Bobby Scott (D-Va.).

As a result, the current UAW president was forced “to take a leave of absence; a sixth former UAW official has pleaded guilty to charges of conspiracy and fraud; a 12th and 13th person have been charged in this brazen scandal; and committee Democrats on a party-line vote passed H.R. 2474, the Protecting the Right to Organize Act of 2019, a sweeping union boss wish-list that will increase the likelihood of similar instances of wrongdoing in the future,” Foxx and Walberg wrote.

Foxx and Walberg were referring to their Sept. 19 letter to Scott, encouraging him and Rep. Frederica Wilson (D-Fla.) to convene a hearing in the burgeoning corruption scandal at the storied labor organization. Wilson is chairman of the committee’s health, labor, employment, and pensions subcommittee.

The Republicans asked Scott and Wilson for a hearing by Dec. 12 “to investigate formally the outrageous breach of workers’ trust by leaders of the UAW.” A committee spokesman for Scott didn’t respond to The Epoch Times’ request for comment.

“Given this committee’s jurisdiction over the Labor Management Relations Act (LMRA) and other federal statutes governing labor-management relations, we believe it is essential the committee confront the widespread, brazen law-breaking by union leaders who purport to represent nearly 150,000 American autoworkers but have betrayed their trust in favor of self-enrichment,” Foxx and Walberg wrote in the September letter.

“Examining this scandal is particularly important given the committee’s intent to advance H.R. 2474, the Protecting the Right to Organize Act of 2019, which is far-reaching legislation aimed at significantly increasing the coercive power of labor leaders and decreasing their accountability, risking similar episodes of corruption and wrongdoing in the future.”

A spokesman for Republicans on the committee told The Epoch Times on Nov. 14 that neither Scott nor Wilson have ever responded to their September request.

Provisions of the Democrats’ bill include one repealing the Taft–Hartley Act’s Section 14B, which gives states the authority to protect employees’ right to work without being forced to pay mandatory union dues. Twenty-seven states have approved right-to-work laws since Taft–Hartley became law in 1947.

Organized labor officials have spent hundreds of millions of dollars in members’ dues opposing right-to-work laws and in efforts at the federal level to repeal Section 14B. Less than 7 percent of all private-sector workers are members of unions. One third of government workers are unionized.

The proposal also requires companies to provide unions with the home addresses, email addresses, cellphone numbers, and much other private information about employees, as well as compromising the right to secret ballots in union representation elections, legalizing secondary boycotts and increasing penalties for company executives convicted of violations of the National Labor Relations Act.

Foxx and Walberg also criticized committee Democrats for devoting substantial time and effort on oversight of the Department of Labor while ignoring the efforts of the department’s Office of Labor-Management Standards (OLMS), which enforces numerous financial disclosures by unions.

The OLMS was strengthened during President George W. Bush’s administration in an effort to force greater transparency and accountability for how union leaders spend members’ dues.

“Had the Obama administration not unilaterally rescinded [Bush-era OLMS rules], the UAW leadership’s misuse of members’ dues would have been publicly disclosed without a federal investigation and possibly prevented altogether,” Foxx and Walberg said in their latest letter.

Rep. Chuck Fleishmann (R-Tenn.) told The Epoch Times on Nov. 14 that he hopes the hearing will be held because of “the need for increased transparency and accountability of the UAW.”

“The request for a public hearing is justified due to a concerning and ongoing investigation, and I would like the hearing to happen sooner rather than later,” he said.

Fleishmann’s district includes the Chattanooga Volkswagen plant that the UAW has tried unsuccessfully for a decade to organize. He is a member of the House Appropriations Committee.