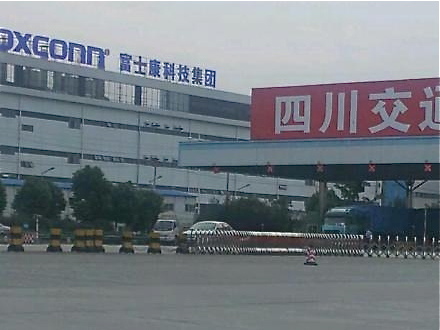 A Foxconn worker in Chengdu factory found sitting on top of a building at 4 p.m. on June 13. He then jumped off the building at 4:40 p.m. (Weibo.com)
China

On June 13, another employee of Foxconn, the electronics giant and primary manufacturer of Apple consumer electronics, jumped to his death. Local residents and other Foxconn employees say workers frequently jump off buildings and most believe it is due to the harsh and repetitive working conditions.

Since Jan. 23, 2010, 19 Foxconn employee suicides have been reported. Shocking allegations on the Internet state that not all of these cases were suicides, saying some were murders.

An Epoch Times reporter interviewed employees and a resident about the working conditions at Foxconn.

Mrs. Yang, a Foxconn Chengdu employee, said the workers are not allowed to talk about anything bad that happens at the factory. “The news is completely censored here,” she said.

Another employee , Mr. Xu, told The Epoch Times that a lot of co-workers jumped to their deaths because of poor working conditions, but Foxconn attributes the suicides to personal issues.

“I have been working here for a while. Changes are all superficial; the exterior seems to have been renovated, but that’s just to show the outside. The factory environment stays the same. The work environment, benefits haven’t been improved at all,” Mr. Xu said.

McClatchy Newspapers, a U.S. newspaper company, recently interviewed several Foxconn employees including Wu Zeyun and Huang Li. Wu said, “Some people come for a few days and then leave.” His friend Huang Li said, “It happens every day. The feeling here is not good.”

The Epoch Times reporter also spoke to Wu and Huang, who both agreed that after deductions from their paychecks, including housing, they each pocketed about 1,100 yuan (US$173) in the month of May for 50-hour working weeks putting together iPads, including overtime.

A Chengdu resident named Mr. Liu, who has a friend working at Foxconn, told The Epoch Times the workers are 18 to 25 years old and the work environment is dangerous. According to Mr. Liu, it is very common to see people being assaulted.

Police and fire trucks arrived a half-hour before the man actually jumped, but did not immediately set up an air mat.

That evening, Chengdu Gaoxin Police Station issued an official microblog post saying, “Around 4:40 p.m. today, a Foxconn employee fell off the apartment building. The employee’s last name was Xie and he died. Specific reasons are still under investigation.”

Mr. Sun told The Epoch Times reporter that Xie’s parents brought a wreath to the factory, but guards employed by Foxconn destroyed it. “Not only that, even the stores near the factory didn’t dare to sell anything to the parents, fearing retaliation from Foxconn,” Sun said.

Foxconn worker Mrs. Yang, said a second young man jumped off the building not long after Xie did. An online blogger said there were two more jumpers. Someone with the screen name Zhang Yi Chuang posted on June 28: “Last night, in Chengdu Pi County Hongguang Town, Foxconn Northwest factory, two others jumped off the building. Four people have jumped off just this month.”

When the reporter tried calling the Foxconn facility in Chengdu, a receptionist whose last name was Li redirected the call to her superior, but no one answered the phone.

The Foxconn facility in Chengdu manufactures LCD displays for Apple’s iPhone and iPad. Located in Sichuan Pi County Hong Guang Town, the majority of the workers are aged 16 to 36 and come from remote villages in Sichuan.