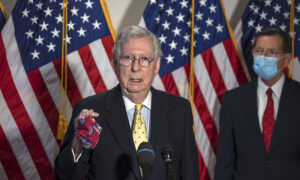 Fox News Media President Jay Wallace this week warned news networks against prematurely declaring the winner of the presidential election on the night of Nov. 3.

Speaking to Reuters in an interview published Monday, Wallace recalled the night of the election two decades ago, which saw multiple major news networks inaccurately call the winner in the crucial state of Florida, before subsequently withdrawing their projections.

“I think 2000 still sort of lingers over everyone,” Wallace said. “As competitive as networks can be, you do know that you’re calling a presidency and you don’t want to be wrong on something like this.”

During the 2000 election, Bush’s narrow margin of victory in Florida led to a recount. After more than a month of political and legal battles, the Supreme Court halted the counting in a 5-4 decision that further divided the nation—and still roils some Democrats.

With just weeks to go before this year’s matchup between President Donald Trump and Democratic presidential candidate Joe Biden, television networks are facing greater pressure than ever to report election results accurately and without unwarranted speculation.

Among the nation’s—and the networks’—challenges are the concerns over voter fraud amid the wider use of mail-in ballots due to the CCP (Chinese Communist Party) virus pandemic, raising the prospect of a prolonged vote count with the potential for protests, violence, and lawsuits.

The unprecedented ramp-up of unrequested mail-in ballots this year has presented issues such as voter fraud, discarded, and rejected ballots.

“I know there are a number of investigations right now, some very big ones, in states,” Barr said in response to a question about how many voter fraud indictments the Department of Justice (DOJ) has brought on his watch.

Barr said he did not know the exact number. Speaking with The Epoch Times last week, Hans von Spakovsky, a lawyer who manages The Heritage Foundation’s Election Law Reform Initiative, said that a database managed by the foundation has documented 1,298 proven instances of voter fraud.

At least 83 percent of American voters, or roughly 100 million people, will be able to vote by mail in the 2020 election, according to a tally by The Washington Post.

President Donald Trump opposes a universal vote-by-mail election, arguing that it’s an invitation for fraud and opens the door to Election Day chaos due to the inefficiency of the U.S. Postal Service.

Democrats are waging a well-funded legal campaign across the nation to make it easier to vote by mail beyond absentee ballots. They are litigating at least 80 of the more than 100 vote-by-mail court cases across the nation.