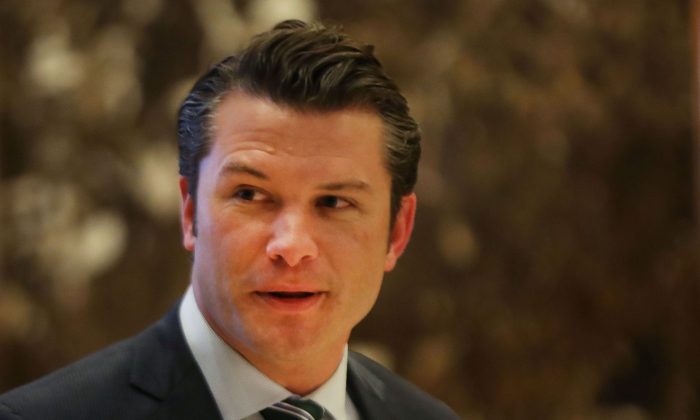 Pete Hegseth, who appears on Fox News’ “Fox and Friends,” said he hasn’t washed his hands in more than a decade in what appears to be a joke.

“I inoculate myself,” Hegseth, a graduate from Harvard and Princeton, said on the show.

Ed Henry and Jedediah Bila, the other hosts, laughed at his statement, but he doubled down.

“I inoculate myself,” he said. “Germs are not a real thing. I can’t see them; therefore, they’re not real.”

“I can’t get sick,” he said to laughter.

On Twitter, he took a stand against handwashing, writing “#DontWash.”

However, it appears that he was joking despite what some media outlets and users on Twitter said.

In comments on Feb. 11, Hegseth appeared to confirm it was a lighthearted comment.

“The Media is so self righteous and ANGRY! Loosen up and have some fun. The Country is doing well (as is my health!) P.S. I also support drinking from garden hoses & riding bikes w/o a helmet. Cue outrage,” he tweeted while linking to a USA Today report that doesn’t address the possibility of it being a joke.

Other news outlets, including leftist website Raw Story, which was the first to report on his comments, also appeared to take Hegseth’s remark at face value and didn’t question whether he was being facetious.

Nonetheless, his comments were met with a wide variety of reactions, with many offering their support and concern.

“I’m with you on hand washing. I’m almost 70 and haven’t had a cold or flu in years. Our bodies need some germs to learn how to fight them. Too many germofobes out there,” wrote one person on Twitter.

When even @chrislhayes can see the obvious…Twitter really has come full circle. https://t.co/o1dPPaWEhS

But another said, “I wonder if @PeteHegseth would be cool with restaurant workers preparing his food after deliberately not washing their hands?”

Added Kelly Whiteheart, “Spend some time as a teacher in a kindergarten class, trust me, you’ll wash your hands!”

To paraphrase the President from an hour ago:

The Media is so self righteous and ANGRY! Loosen up and have some fun. The Country is doing well (as is my health!)

The U.S. Centers for Disease Control and Prevention (CDC) recommends that people frequently wash their hands to prevent the spread of disease.

“Washing hands with soap and water is the best way to reduce the number of microbes on them in most situations. If soap and water are not available, use an alcohol-based hand sanitizer that contains at least 60 percent alcohol,” said the agency.

The CDC said that 1.8 million children died each year around the world from diarrheal diseases and pneumonia, which are the No. 1 and No. 2 killers of young kids.

“Handwashing with soap could protect about 1 out of every 3 young children who get sick with diarrhea 2, 3 and almost 1 out of 5 young children with respiratory infections like pneumonia,” said the agency, adding that “estimated global rates of handwashing after using the toilet” are about 19 percent.

Jamin Brahmbhatt, a physician at Orlando Health, said that not washing your hands can have an adverse impact on the people around you.

“Washing your hands is the easiest way to protect yourself and others from spreading bugs that can live on your hands,” Brahmbhatt told USA Today. “We can get germs on our hands by touching other parts of our body, sneezing or coughing, touching other people or things like animals or meat.”