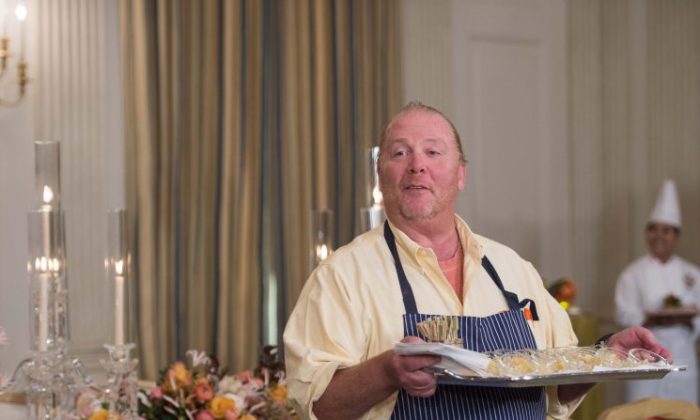 Chef Mario Batali speaks to the press at the White House in Washington, DC, on Oct. 17, 2016. (Nicholas Kamm/AFP/Getty Images)
US News

Celebrity chef Mario Batali announced that he will step away from his restaurant empire after four women accused him of sexual misconduct in an Eater NY article published on Monday, Dec. 11, which detailed a pattern of inappropriate behavior spanning at least two decades.

The ABC television network also confirmed that it asked Batali to leave “The Chew” while the company reviews the allegations, according to Fox News.

The four woman who accused Batali, 57, were not identified in the original Eater NY report. Three of the women claimed that Batali groped them. One of the three said that she was a fellow chef and that Batali grabbed her at a New Orleans wine auction.

Batali is married and has released a statement to apologize to his family, employees, fans and customers.

“I apologize to the people I have mistreated and hurt,” said Batali in a statement obtained by Eater. “Although the identities of most of the individuals mentioned in these stories have not been revealed to me, much of the behavior described does, in fact, match up with ways I have acted. That behavior was wrong and there are no excuses. I take full responsibility and am deeply sorry for any pain, humiliation or discomfort I have caused to my peers, employees, customers, friends and family.

“I have work to do to try to regain the trust of those I have hurt and disappointed. For this reason, I am going to step away from day-to-day operations of my businesses. We built these restaurants so that our guests could have fun and indulge, but I took that too far in my own behavior. I won’t make that mistake again. I want any place I am associated with to feel comfortable and safe for the people who work or dine there.

“I know my actions have disappointed many people. The successes I have enjoyed are owned by everyone on my team. The failures are mine alone. To the people who have been at my side during this time — my family, my partners, my employees, my friends, my fans — I am grateful for your support and hopeful that I can regain your respect and trust. I will spend the next period of time trying to do that.”

ABC, which airs the daytime cooking series “The Chew” also issued a statement.

“We have asked Mario Batali to step away from ‘The Chew’ while we review the allegations that have just recently come to our attention,” writes an ABC spokesperson in a statement. “ABC takes matters like this very seriously as we are committed to a safe work environment. While we are unaware of any type of inappropriate behavior involving him and anyone affiliated with the show, we will swiftly address any alleged violations of our standards of conduct.”