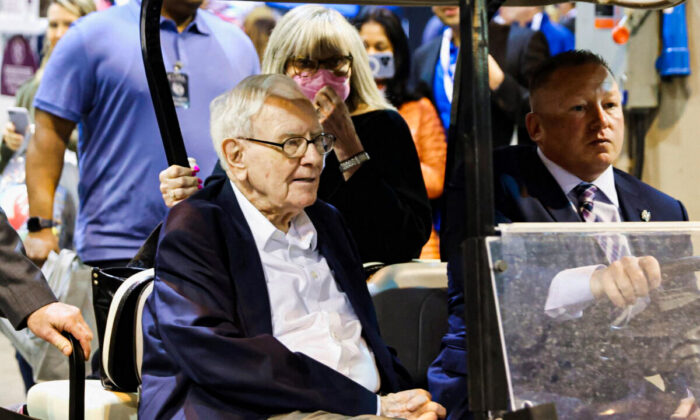 Berkshire Hathaway CEO Warren Buffett rides on a golf cart through the exhibition hall as investors and guests arrive for the first in-person annual meeting since 2019 of Berkshire Hathaway in Omaha, Neb., on April 29, 2022. (Scott Morgan/Reuters)
Companies

Berkshire Hathaway kicked off its annual meeting on April 30 in Omaha, Nebraska. Warren Buffett, CEO and chairman of the company, and Vice Chairman Charlie Munger discussed a wide range of topics at the meeting’s opening.

Tens of thousands of investors packed an Omaha arena for Berkshire’s annual meeting, which was convened in person for the first time since the COVID-19 pandemic began, although the turnout was likely smaller than when it used to regularly attract more than 40,000 people.

Buffett said bitcoin is useless, preferring instead productive assets such as farmland and apartment buildings.

“If the people in this room owned all of the farmland in the United States and you offered me a 1 percent interest in it … for $25 billion, I will write you a check this afternoon,” he said. “It’s very simple.

“If you told me you own all the Bitcoin in the world, and you offered it to me for $25, I wouldn’t take it because what would I do with it?

“That explains the difference between productive assets and something that depends on the next guy paying you more than the last guy got.”

Munger said, “I got some advice for you, too. When you have your own retirement account and your friendly adviser suggests you put all the money in Bitcoin, just say, ‘No.'”

Inflation has surged in the United States, hitting a new 40-year annualized high of 6.6 percent in March, and Federal Reserve policymakers appear set to deliver a series of aggressive interest rate increases to cool prices.

Buffett said he didn’t know what level inflation would be at in the next month or decade, but that rising prices were having an effect.

“Inflation, in our own business, it’s extraordinary how much we’ve seen,” he said. “For two years, the prices have kept coming in higher.”

Auto-insurer Geico posted an underwriting loss in the first quarter because loss claims rose as the prices of used vehicles and parts surged.

Buffett gave Berkshire Hathaway investors a few details about how he spent more than $50 billion earlier this year.

While he didn’t reveal everything he bought, he did mention several highlights, including boosting Berkshire’s stake in oil giant Chevron to $26 billion, from $4.5 billion at the beginning of the year, making it one of the conglomerate’s four biggest investments. Berkshire also spent billions of dollars buying up 14 percent of Occidental Petroleum’s shares in the first half of March, and added to its already massive investment in Apple stock.

Buffett also made a big bet on Microsoft’s planned acquisition of Activision Blizzard. He said a couple of months after one of Berkshire’s other investment managers bought roughly 15 million Activision shares that he increased that stake to roughly 9.5 percent of the company—or about 74 million shares—after Microsoft announced the deal in January, when Activision stock was selling for less than the $95-per-share deal price.

Berkshire’s earnings report shows that its mountain of cash shrank to $106 billion in the first quarter from $147 billion at the beginning of the year, as Buffett invested $51 billion in stocks.

Buffett picked on a favored target, Wall Street, saying that the stock market sometimes resembles a casino or gambling partner.

The market is investment-oriented sometimes, but it’s almost totally a casino and gambling parlor at other times.

Wall Street’s gambling “existed to an extraordinary degree in the last couple of years, encouraged by Washington money,” he said.

“They don’t make money unless people do things, and they get a piece of them. They make a lot more money when people are gambling than when they are investing. It’s much better to have somebody that’s going to trade 20 times a day, and they’re all excited about just like pulling the handle of a slot machine,” Buffett said.