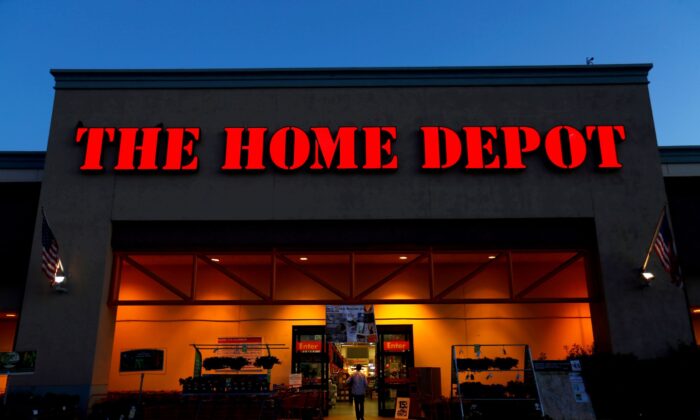 BEVERLY HILLS, Calif.—Four suspects who police believe might be involved in the flash mob robbery of at least $400 in merchandise from a Home Depot in the Lakewood Center Mall were arrested in Beverly Hills Nov. 27.

Officers stopped one of the cars and took the suspects into custody.

“We’re currently working with the Los Angeles County Sheriff’s Department to see if there is a link to the Lakewood Home Depot incident or any other crimes that have been committed,” Newman said.

Approximately eight males entered the store at 7:46 p.m. Nov. 26, walked directly to the tool aisle, and stole various sledgehammers, crowbars, and hammers valued at approximately $400, according to Deputy Miguel Meza of the Sheriff’s Information Bureau.

Store employees told Fox11 a group of up to 20 males between 15 and 20 years old pulled up to the store in as many as 10 cars, put on ski masks, and began stealing sledgehammers and crowbars.

Some of the suspects possibly entered a red Mercedes with severe damage to the front and fled, Meza said.

It was another in a series of so-called “flash mob” or smash-and-grab robberies across Los Angeles County in the past week, several of them taking place on Black Friday.

According to KCAL9, a total of six smash-and-grab robberies took place Nov. 26 in the Fairfax District, Beverly Grove, and Hancock Park.

A large group of thieves entered the Bottega Veneta store at 8445 Melrose Place—near Croft Avenue and the border with West Hollywood—and stole an unknown amount of items before fleeing.

On Nov. 24, robbers attacked a security guard and stole designer handbags worth an estimated $25,000 from the Nordstrom store at the Westfield Topanga mall in Canoga Park.

The same day, “flash mob” suspects entered several stores in the 8500 block of Beverly Boulevard at the Beverly Center, grabbed merchandise, and ran out without paying, according to the Los Angeles Police Department (LAPD).

On Nov. 22, a smash-and-grab robbery by a mob of at least 20 people took place at the Nordstrom store at the upscale Grove shopping center in the Fairfax district. The suspects in that robbery fled the scene in at least four cars.

Three suspects were arrested in South Los Angeles following a chase. Officers recovered several items of clothing, at least one cash register, and gloves from their car.

Also Nov. 22, at about 9:45 p.m., six suspects entered a CVS Pharmacy in the 5800 block of South Vermont Avenue in the South Los Angeles area and stole three cash registers, taking about $8,500 in cash, police said.

The day before, storefront windows of the Louis Vuitton and Saks Fifth Avenue stores in Beverly Hills were smashed during attempted burglaries.