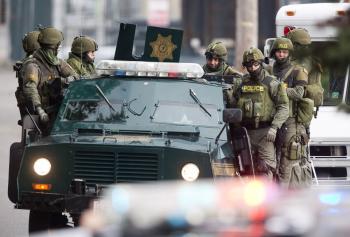 SWAT team members ride on a armored vehicle while searching for a suspect November 29, 2009 near Lakewood, Washington. (Stephen Brashear/Getty Images)
US

By Joshua Philipp
Print
Four city police officers were killed Sunday morning in a coffee shop in Lakewood, Washington State. The officers (three male, one female) were reportedly doing paperwork in preparation for their shifts when a gunman entered the shop and opened fire.

Pierce County Sheriff's Office spokesman Ed Troyer spoke with press about the attacks. In a video of the interview, Troyer said the four officers were ambushed and "were targeted."

As of press deadline, the gunman was still at large. The Pierce County Sheriff’s Department is calling Maurice Clemmons, 37, a person of interest. People from the community were leaving flowers in remembrance of the slain officers at the police station throughout the day on Sunday after hearing the news.

There were two baristas and other customers in the shop when the shooting took place. "None of them were hurt or shot at or aimed at," said Troyer. "It was not a robbery. The gunman came in there and opened fire on the four police officers."

The attack took place at around 8:15 a.m. The preparation the officers were doing before their shifts when the shootings took place was a regular procedure. It is uncertain whether the officers regularly did their morning paperwork at the same coffee house.

All four officers were part of the original staff of officers at the relatively young police station. The station had been in operation for only five years.

“As a retired police officer, this senseless shooting hits extremely close to home to me,” said Brad Carpenter, Chief Executive Officer of Forza Coffee in a statement released on their website. “These officers put their lives on the line every day to keep us safe, and this crime cuts deep into the heart of the entire Forza family.”

Calls made to the Pierce County Sheriff's Office were not returned as of press deadline.

The gunman is described as an African-American male, 5'8" with scruffy facial hair, and wearing a black coat and blue jeans, according to reports. It is uncertain whether he was alone or had an accomplice.

According to geopolitical intelligence company Stratfor, similar incidents have taken place in the Seattle/Tacoma area recently. On Oct. 31 an officer was shot and killed while he was parked in his cruiser. In October, a suspect named Christopher Monfort was linked to the firebombing of several police vehicles.

The coffee house where the recent shooting took place is also near the McChord Air Force Base, according to Stratfor.

It is uncertain whether the motives of the shooter have any link to those of the shooter at the Fort Hood military base in Texas, which took the lives of 13 people earlier this month.