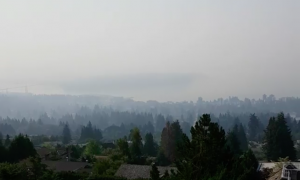 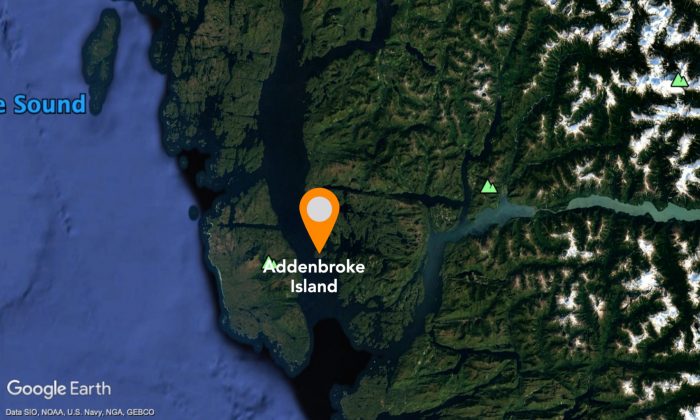 A float plane had crashed on Addenbroke Island, about 100 kilometres off the northern end of Vancouver Island, Canada. (Google Earth)
Canada

VICTORIA, Canada—Four people have been confirmed dead with five others injured in a float plane crash on an uninhabited island off the northern end of Vancouver Island.

Lt. Chelsea Dubeau with the Joint Rescue Co-ordination Centre in Victoria said they received word Friday that a Cessna 208 float plane had crashed on Addenbroke Island, about 100 kilometres off the northern end of Vancouver Island.

The centre said the chartered plane that had nine people aboard crashed at about 11 a.m. It was headed to Calvert Island, a significantly larger neighbouring island, it said.

“Unfortunately we can confirm at this time that there are four individuals that are deceased,” Dubeau said.

#BCEHS paramedics have assessed and treated the five survivors of the Addenbroke Island plane crash.
Two patients in serious condition are being airlifted with critical care paramedic teams to Vancouver.
Three other patients were transported to a local area hospital.

B.C. Emergency Health Services said two of the survivors were airlifted to hospital in Vancouver in serious condition, while three others were taken to a local hospital for treatment of unspecified injuries.

Critical care teams are made up of paramedics with the highest level of specialized training, with a focus on acute medical emergencies and air medical responses, she added.

Single @seairseaplanes plane parked at Coal Harbour Terminal. All flights grounded after Cessna with 9 people on board crashed on Addenbroke Island ~11am. 4 people dead. Other passengers are getting re-booked on other flights. @CBCAlerts @cbcnewsbc pic.twitter.com/gMGTd9dJcr

Seair Seaplanes, which offers daily charter flights and scenic tour flights in British Columbia, said in a statement that the “serious accident” involved one of its Caravan float planes.

“Our thoughts are with those involved in the crash and their loved ones and are devastated by this fatal accident. We are currently working with first responders and authorities and have immediately suspended all flights,” the statement said.

The company said it would provide updates as details become available and its focus was on working with authorities to provide whatever support is needed.

Seair Seaplanes, operator of the float plane that crashed this morning on Addenbroke Island, killing four, has issued the following statement: pic.twitter.com/DxUNnOmS7J

Dubeau said the BC Ferries vessel Northern Sea Wolf was on scene quickly because it was nearby and a Canadian Coast Guard helicopter, Cormorant helicopter, and Buffalo fixed-wing plane were all dispatched to lend assistance.

Dubeau said no one lives on Addenbroke Island, although there is a lighthouse on the island.

The island is on the route the ferry takes from Port Hardy to Prince Rupert.

Chris Krepski, a spokesman for the Transportation Safety Board, said the board was gathering information before deciding what its next steps would be.