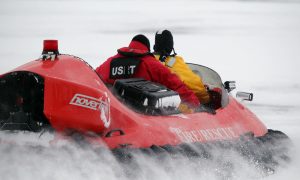 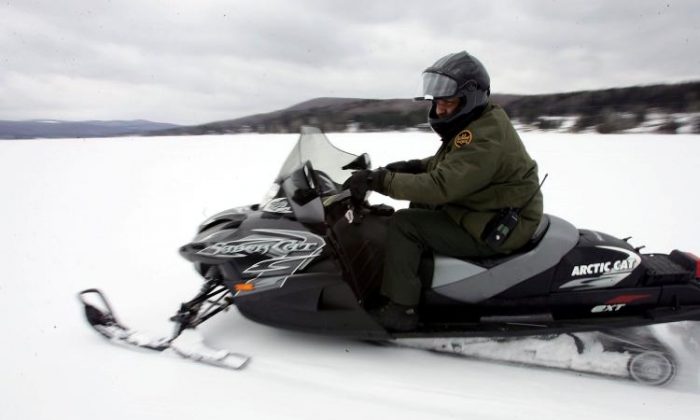 A U.S. Border Patrol agent rides a snowmobile on a frozen lake near the Vermont-Quebec border in a file photo. (Joe Raedle/Getty Images)
US News

The men were spotted by the search helicopter on Dec. 25 but had not been located on the ground as of Dec. 26.

“Information relayed from the pilots was that all four subjects appeared to be in good health and had a fire. The pilots were able to drop the party some food and water with a note to stay put, help will be on the way,” reported WYO4.

They were located deep into Carbon County, in the area of Deep Creek, but the difficult terrain and adverse weather conditions prevented snowmobile search teams from making contact with them by nightfall and recovery efforts were set for Wednesday.

The snowmobiles were reported overdue on Sunday, triggering a search for the men, the Albany County Sheriff’s Search & Rescue said.

Their truck was later found in the Green Rock parking area at the Snowy Range Ski and Recreation Area, about 30 miles outside Laramie, reported KSFY.

Family members told KELOLAND News previously that a helicopter and airplane were involved in the search, in addition to more than 50 snowmobilers who were assisting authorities.

The search area was large because the men’s planned route was unknown.

Snowmobiling is most popular in the United States and Canada.

In 2018, there were 124,786 snowmobiles sold worldwide: 53,179 were sold in the United States and 47,024 were sold in Canada, according to the International Snowmobile Manufacturers Association.

The group said that the average age of a snowmobiler is 45 years old and that the average snowmobile rider travels 1,250 miles a year in North America, typically between 30 and 75 miles per trip. The majority of owners are married and have children.

“Snowmobiling is great exercise bringing people outdoors interacting with nature and each other. It is an invigorating sport, great for stress release and good mental health,” the group stated. Reasons for snowmobiling include viewing the scenery, hanging out with friends, and doing an activity with family members.

Snowmobiles were originally developed in the late 1950s, with the development of smaller gasoline engines.

“A new recreational activity was born,” the group stated.

“Today, with more than four million riders, snowmobiling is a major winter recreational activity and a significant factor in increased winter tourism in much of Canada, the snow belt of the United States, in Northern Europe, and in Russia.”

The machines nowadays are updated so much that they bear little resemblance to those manufactured in the 1960s and 1970s, according to the organization.