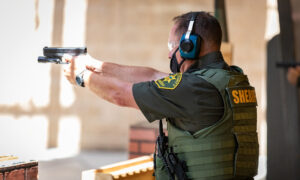 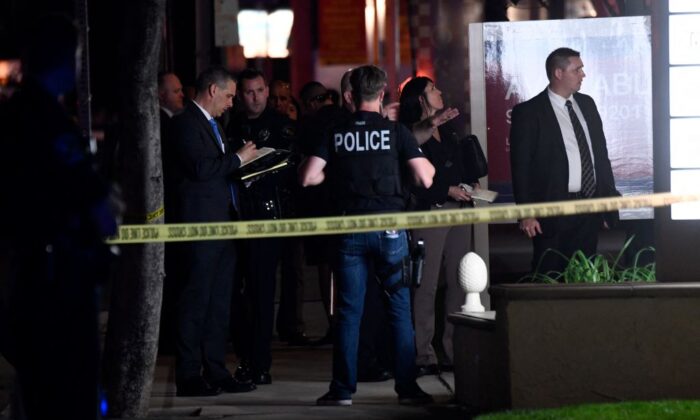 Police officers and agents stand outside an office building where multiple people were killed in a shooting in Orange, Calif., on March 31, 2021. (Patrick T. Fallon/AFP via Getty Images)
Southern California

Four Killed in Shooting at Office Building in Orange

ORANGE, Calif.—Four people, including one child, were killed and a fifth wounded in a shooting at an office building in Orange March 31, and the suspected shooter was taken into custody.

Orange Police Department Lt. Jennifer Amat told The Epoch Times that the surviving victim was a female, who has been taken to the hospital and is currently in critical condition.

The suspect was shot by police and also taken to a hospital, Amat said. The suspect is also in critical condition.

Amat said police were called to the scene on Lincoln Avenue around 5:30 p.m. When they arrived, they were met with gunfire.

“Tonight at approximately 5:30 p.m. our officers were dispatched to 202 W. Lincoln Ave. in the city of Orange. The original call was ‘shots being fired.’ When officers did arrive on scene, they did encounter live gunfire. The officers engaged, and an officer-involved shooting ensued,” Amat said.

“The officers located four deceased victims on the scene, including one child. There was an additional victim that was transported to the hospital. She is in critical condition.

“Officers have located one firearm on the scene, and the investigation is currently in progress. It will take several hours, days, and weeks to truly understand any relationship between the shooter and the victims, as well as any motive. At this point, it’s all under investigation.”

Amat said the incident was the city’s worst mass shooting in over two decades.

Five people were killed and two others wounded in that 1997 shooting after former a state employee, Arturo Reyes Torres, 41, of Huntington Beach, opened fire at the Caltrans facility near Batavia Street and Taft Avenue. Torres was shot and killed by police a short distance away from the maintenance yard.

Julio, who lives in the Georgian Apartments across the street from the office building, told The Epoch Times he returned home from work around 8 p.m., after receiving messages about the shooting.

“I was at work the whole time it happened. I had a little time to check my phone at work, and I had a whole bunch of messages” saying there’s a shooting, Julio said. “I thought it was crazy, cause you see it all over the news and … it happened literally right here.”

The shooting was the third since March 16 where at least four people were killed after it had been a year since a shooting of that scale, according to The Violence Project, a St. Paul, Minnesota-based research center known for its mass shooter database.

The organization defines a mass shooting as one where four or more victims are killed with firearms—not including the offender or offenders—in a public location, such as a workplace, school, or restaurant, when the perpetrator or perpetrators selects the victims somewhat indiscriminately.

The story will be updated as more details become available.