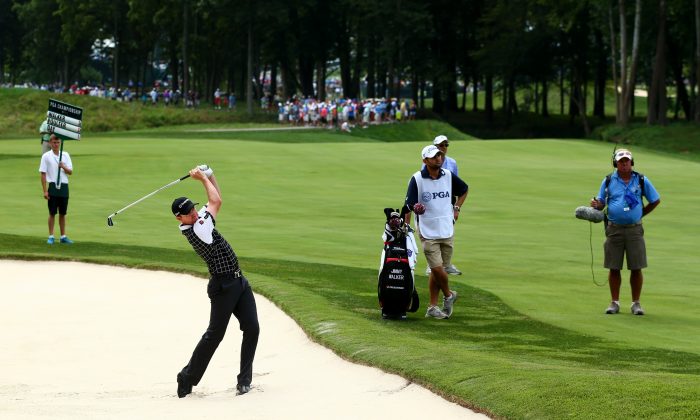 Jimmy Walker hits an approach shot from a bunker on the second hole during the first round of the 96th PGA Championship at Valhalla Golf Club. (Jeff Gross/Getty Images)
Golf

Four Holes to Watch at the PGA

Valhalla, site of this year’s PGA Championship—the final golf major championship for 2014—will never be confused with the likes of such classic courses as Shinnecock Hills, Oakmont or Pebble Beach. The Louisville, KY location was chosen for a slew of reasons—the design and challenge of the course was among the considerations but not the primary reason.

In 2000, the PGA of America purchased the club from the founding Gahm family. Valhalla opened in 1986 and since then, counting this year’s PGA event, will have hosted no less than six top tier golf events—including the Ryder Cup Matches where the USA team last won in 2008.

The 438-acre site is able to host upwards of 40,000 people and with no expenses to pay out for a chosen venue—that’s plenty of dollars heading into the coffers of the PGA. There’s spacious amount of land for all the needed elements for a major golf event: media compound and corporate and merchandising tents, all de rigueur in today’s need for mega-big sites.

The Jack Nicklaus designed layout has been tweaked over the years but generally provides generous fairways to hit from the tee—the onus being on approach shots to greens with plenty of contours that need to be successfully negotiated.

On the scorecard the course lists 7,458 yards with a par of 71. There are a number of key holes to watch this weekend—here are four that could prove critical for the aspiring player desiring to hoist the famed Wannamaker Trophy when play ends.

Hole 2 is played as a par-5 in all other events at Vahalla as it really permits a quick birdie to jumpstart a number of rounds. Not so this time around. The hole turns left and as it does the width of the effective landing area narrows considerably. A bunker on the right side requires a 300-plus yard carry—pull it too much and a severe slope can propel one’s ball into oblivion with Floyd’s Fork creek awaiting. Players opting to carry the bunker will need to hit a top tier tee shot—marrying sufficient length and proper placement.

Look for a number of players to lay-up left and then face a 220-230 yard shot to a green that has little depth and is sloped diagonally. Called “The Ridge,” the 2nd is an early test of nerves for players still looking to get into a smooth rhythm for the day. The wake-up call will come early.

Nothing is worse for top-tier players than being forced to lay-up on a hole. The 6th at Vahalla turns right in the drive zone but the land falls back to the left. Complicating matters is a fairway which ends at 300 yards with the aforementioned Floyd’s Fork coming back into the picture.

There’s little real bailout and should players hit too far right, the result will be a simple pitch back to the fairway while still having more than 200 yards to get to the putting surface.

Named “The Bear” the 6th is another minefield hole where low scores will be at a premium. Bogeying the hole is one thing—but even higher scores can certainly happen here with just the smallest of miscalculations made by any players.

The start of three consecutive solid par-4’s at Vahalla. The 15th is particularly wooded—the drive will come through a narrow opening through a chute and the preferred line is the right side of the fairway. There is a bunker on that side—over 310-plus yards to carry. Miss left and the echo you hear will be the ball bouncing off a dense inclusion of trees. Brush Run Creek follows the entire right side and is a devilish matter for those who push approaches when the pin is placed on the far right side.

Birdies are possible but the key will be securing the fairway for that to happen. Players opting to bailout left will face a green that runs away from them towards the creek. Not an impossible hole but not one that can be treated cavalierly. Called “On the Rocks,” players will be making sure their ball finds terra firma when playing it.

The ultimate “swing” hole because of the possibility so much can transpire—and has from past events at Vahalla. Players who are behind in the championship will look for one more golden opportunity to push their names up the leaderboard. Look for exciting moments with possible eagles and even double-bogeys for those who dream big but fail in the process.

The drive starts the fun. There is water on the right side and a deep fairway bunker on the left. Most players will have an opportunity to go for the green in two blows when finding the fairway – but the approach must carry a center-placed bunker that cannot be ignored without peril.

The green is a horseshoe with three distinct areas. How appropriate since the event is being staged in Kentucky—noted home for some of the finest stallions and mares in the world.

The 18th is uniquely called “Gahm over,” for the original owners of the site. The connotation is so apt—the resolution of this week’s event will likely come down to this hole as it has for the two previous PGA’s played here. Will the event conclude as it did in 2000 when both Bob May and Tiger Woods birdied the hole in epic fashion forcing extra holes to decide the championship? No question the drama for a fitting conclusion is here for golf’s final major of the season.