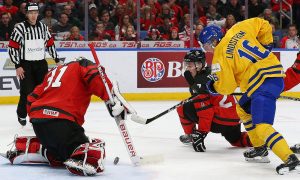 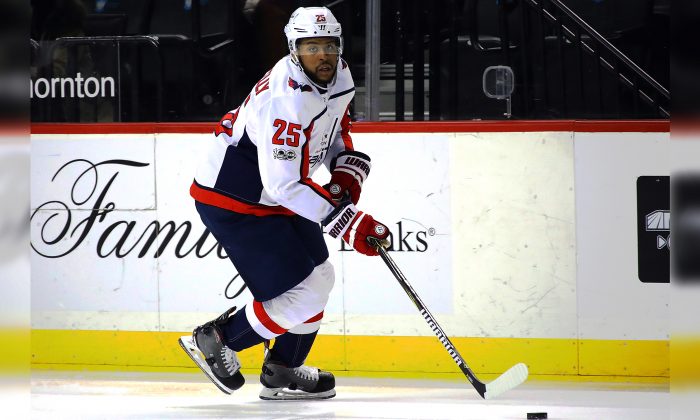 Devante Smith-Pelly #25 of the Washington Capitals skates against the New York Islanders at the Barclays Center on December 11, 2017 (Bruce Bennett/Getty Images)
Sports

For fans were ejected from a hockey game between the Chicago Blackhawks and Washington Capitals on Saturday, Feb. 17 after they chanted “Basketball” at a player in the penalty box.

Capitals forward Devante Smith-Pelly was sent to the penalty box during the third and final period of Saturday night’s game, played in Chicago’s United Center.

Two Smith-Pelly GIFs. First, you can see him hear someone say something to him, and he looks over at them. pic.twitter.com/LvwUgFl7AL

The penalty box is separated from the fans by only a single sheet of Plexiglas—it is one of the only places in a hockey arena where a fan can get close to a player.

Four Chicago fans began chanting “Basketball, basketball,” at Smith-Pelly. The Capitals player stood and turned to the fans and exchanged words with them before a game official stepped in.

Next, he clearly has had enough of whatever is being said, gets up to address the fans. pic.twitter.com/VLu4qHSSMy

Smith-Pelly, a 25-year-old Canadian, told NBC Sports, “I just heard some chanting, some, I guess, racially charged chanting. You can tell by my reaction that I got pretty upset.

“What was said this time around crossed the line.”

In that same post-game interview Smith Perry said, “It’s sad that in 2018 we’re still talking about the same thing over and over.”

“It’s sad that athletes like myself 30, 40 years ago were standing in the same spot saying the same thing.

The Chicago Blackhawks released a statement when they learned of what had happened, saying in part, “We are committed to providing an inclusive environment of everyone who attends our games and these actions will never be tolerated.

Devante Smith-Pelly on the incident last night in Chicago. pic.twitter.com/Oz9qfFWMQH

NHL Commissioner Gary Bettman issued a statement Sunday, saying, “The National Hockey League condemns this unacceptable and reprehensible behavior. The League fully supports the actions taken by the United Center and the Blackhawks to eject the offenders and would expect the same response to any similarly unacceptable behavior at any of our arenas.

Smith-Perry said after the game that while he was no stranger to such comments, he was tired of silently ignoring them.

“We are at a time now where you can‘t just brush it under the rug,” he said.

“You’ve got to start calling people out and making sure other people see people’s true colors.”