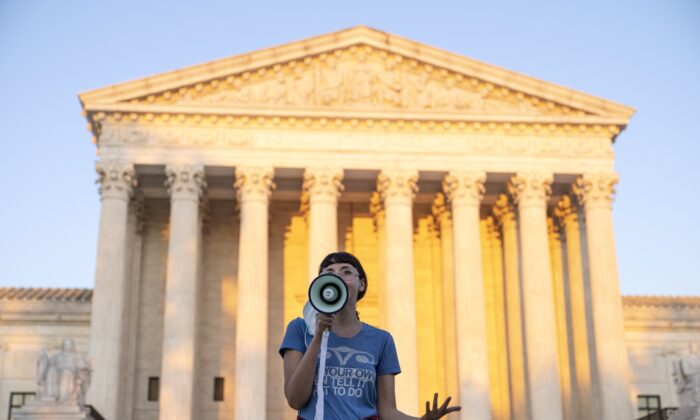 An activist speaks outside the Supreme Court in protest against the new Texas abortion law in Washington on Sept. 2, 2021. (Drew Angerer/Getty Images)
Viewpoints

Those are all marks of a deeply unprincipled individual.

I’ve been closely observing the debate around the Texas pro-life law that makes abortion unlawful in virtually all cases beyond six weeks of pregnancy and empowers private individuals and entities to sue, not the women who have the abortions, but the clinics, doctors, nurses, and all other enablers who facilitate and perform the abortion. The effect has been to create something that hasn’t existed in the United States since 1973: a state in the union where abortion is largely prohibited and largely unavailable.

Now, let’s turn to four glaring contradictions in progressive and liberal condemnation of the Texas law. Vice President Kamala Harris declared that the law was a gross violation of people’s right to control their own bodies. Such a right, she insisted, is “not negotiable.” That’s an obvious repetition of the slogan, “My body, my choice.” Yet, Harris said that virtually on the eve of the Biden–Harris administration announcing a nationwide vaccine mandate. Everyone in the federal government must be vaccinated. Private companies with more than 100 employees must vaccinate all of their employees.

Wait! What happened to people’s right to control their bodies? What happened to “My body, my choice”? Evidently, the very same principle that’s invoked for protection in one context is completely jettisoned in another context to impose vaccine mandates on penalty of fines and other punishments.

So how does a law that’s the very expression of democracy—the will of the people, as expressed by their elected representatives, and upheld by the judicial branch as consistent with the rule of law—somehow become tyrannical? Not only is Swalwell using terms loosely, he’s using them in an inverted or Orwellian sense. War is peace. Lies are truth. Democracy is tyranny.

A third contradiction. Two prominent figures from the United Nations have deplored the Texas law on the grounds that it constitutes sex discrimination. Melissa Upreti, chair of the U.N.’s working group on discrimination, called the law “gender-based discrimination at its worst.”

At its worst? All around the world, there are manifestly graver forms of discrimination against women. In Indian villages, the practice of wife-burning and bride-burning is depressingly common. Afghanistan, under Taliban rule, now severely restricts education for girls. In other Islamic countries, women are discriminated against in multiple ways. In many places, from Thailand to Mexico, there’s massive sex trafficking and forced prostitution.

Can anyone with a straight face say that laws that require women to have their children and put them up for adoption if they can’t or don’t want to care for them somehow constitute sex discrimination “at its worst”?

But evidently, the U.N. is severely behind the times here. Not only in the United States, but throughout the Western world, we’ve seen the rise of a “woke” sensibility that insists that “gender is a social construct” and that there aren’t two, but multiple—perhaps as many as 75 or more—genders, and that “men” and “women,” strictly speaking, don’t exist.

So if men and women don’t exist and no distinction can be made between the two, and gender is a spectrum that has nothing to do with biology, but depends entirely on which gender on the menu you “identify” with, then how can the Texas abortion law, or any law, constitute sex discrimination? How can you discriminate on the basis of a category that itself doesn’t exist?

A fourth—and to me, this is the most interesting one—contradiction concerns the progressive critique of the most novel and innovative aspect of the Texas law—its empowerment of private entities to enforce it. President Joe Biden said the Texas approach “creates a vigilante system.” The left-wing Texas Tribune interviewed legal scholar Jon Michaels, who said that for Texas, “It’s a way of back-dooring and winking while constitutional violations are occurring.”

My goal in this article isn’t to take a stance on the Texas law, but rather to expose the unprincipled lines of attack on it. Soon, the Supreme Court will take up the issue not via the Texas law, but rather a Mississippi law restricting abortion after 15 weeks. Let’s hope our highest court gives the matter the careful scrutiny it deserves and rules in a principled manner that protects our core values of life, liberty, and the pursuit of happiness.