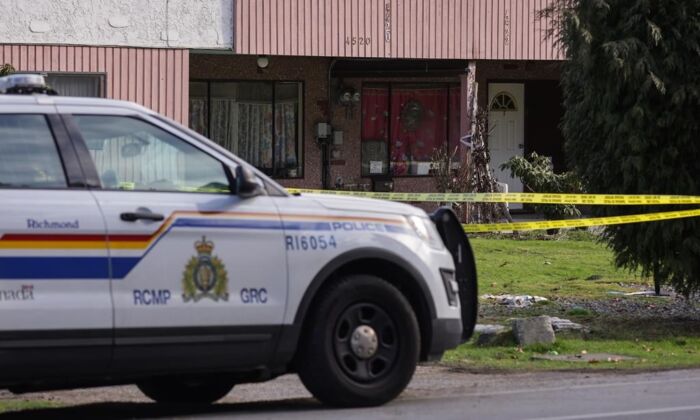 An RCMP officer sits outside a home surrounded by police tape where four people were found dead Tuesday, in Richmond, B.C., on Jan. 26, 2022. (The Canadian Press/Darryl Dyck)
Canada

Four Deaths From Same Family in Richmond, BC, Was an Isolated Incident, Police Say

RICHMOND, B.C.—Police say two men and two women who were found dead at a home after a shooting in Richmond, B.C., were from the same family.

Sgt. David Lee of the Integrated Homicide Investigation Team said the identities of the four people aren’t being released until their family members have been notified.

“There are no suspects at large and (we are) not looking for any additional persons.”

He said investigators have confirmed that the shooting was an isolated incident and the deaths are not a result of partner violence.

Lee said one of the deceased had a valid firearms licence and access toguns. The family members had no known associations to criminal activities, he said.

The two men and two women were found in the home Tuesday, although police say they have confirmedthe shootings happened on Monday evening.

“There was a call to British Columbia RCMP for a suspicious occurrence at the house (on Tuesday) and the police responded to check on the family right away,” Lee said when asked about the delay.

He said a search warrant was executed Thursday that allowed officers to continue their investigation at the scene with the help of the BC Coroners Service and the Integrated Forensic Identification Section.

A timeline of events is being constructed and a motive has not yet been determined, police said.

Investigators are still interviewing witnesses and are asking that anyone who was in the area on Jan. 24 or has information to contact the homicide team.