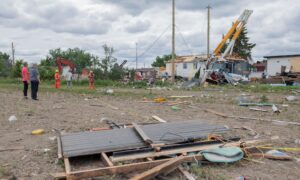 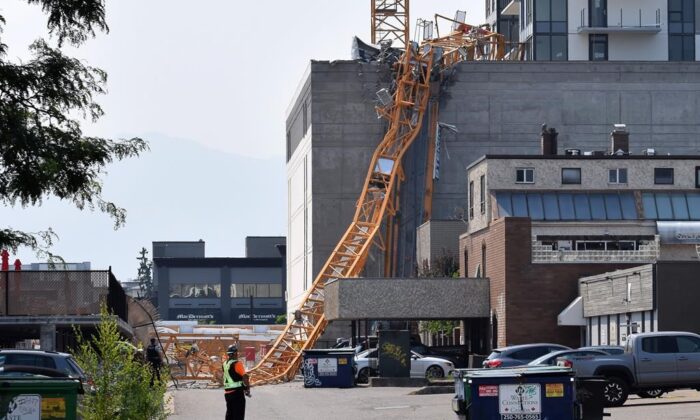 A worker looks on as a police officer investigates a collapsed crane resting on the building it damaged in Kelowna, B.C., Canada, on July 12, 2021. (The Canadian Press/Alistair Waters)
Canada

Four Dead, One Missing After Collapse of Crane in Kelowna, B.C.

KELOWNA, B.C.—The Mounties say four people were killed and a fifth person is missing after a crane collapsed in Kelowna, B.C.

Insp. Adam MacIntosh says four people at the site, all construction workers, were killed when the crane toppled off the 25-storey building on Monday.

He says a fifth man who was working in an adjacent building is missing.

The upper portion of the crane smashed into a neighbouring building, leaving most of its support tower attached.

The head of the development company building the residential tower said Monday he didn’t know what caused the crane to fall.

Jonathan Friesen of the Mission Group said the company’s staff and subtrades were in a state of shock and grief counselling had been offered to anyone who needed it.

The collapse knocked out power for most of Kelowna’s downtown core and forced an evacuation of the area as the city declared an ongoing state of local emergency.