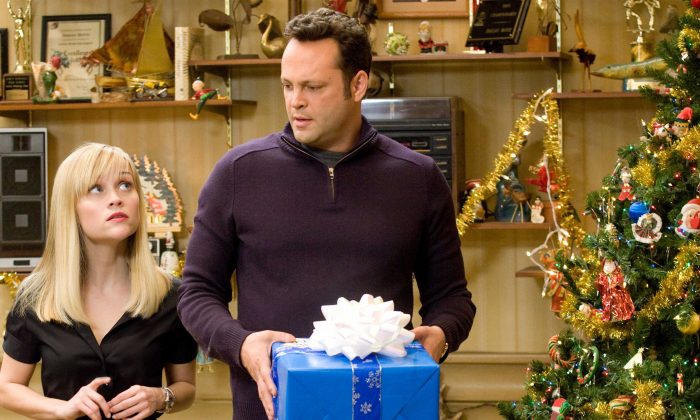 By James Carroll
Print
Every year a festive-themed film tries to lay claim to the Christmas period (recent examples being Christmas with the Kranks, Surviving Christmas and Deck the Halls). Typically these films are baubles, with 2007’s “Christmastime comedy with a Frat Pack spin” Fred Claus being a prime example.

One man that seems to enjoy them though is Vince Vaughn, starring in a second yuletide cinematic treat on the spin in Four Christmases.

The salad dodging Vaughn stars as Brad, one half of perma-happy couple Brad ‘n’ Kate, with the Kate part of the contented equation brought to life by the gremlin-faced and newly “Zellweger-thin” Reese Witherspoon. Unmarried and with no intention of doing so thanks to the example set by their fractured families, Brad ‘n’ Kate always get the most out of the holidays: they go abroad and avoid their respective relations.

That’s until this year, when freak weather grounds all flights out of San Francisco and they are caught on camera by a local news crew covering the ensuing chaos. Seen by all sides of the splintered families and with no escape and no excuses, Brad ‘n’ Kate are left with no alternative but to visit each parent in turn over one marathon of a Christmas day.

Essentially a festive Meet the (sets of) Parents, Four Christmases is made up of a series of skits that puts Vaughn’s reliably funny verbal diarrhoea shtick to good use, whilst Witherspoon reacts by gurning her Bo’ Selecta! chin alongside him.

Consistently (and somewhat unexpectedly) funny for its entire first half, Brad ‘n’ Kate make extended visits to his white trash, disappointed-in-him dad (Robert Duvall) and UFC-trained brothers (Jon Favreau and Tim McGraw), and her Fundamental Christian mum (Mary Steenburgen) and her latest in a long line of boyfriends, Pastor Phil (Dwight Yoakum). Getting embroiled in several calamitous situations (let’s just say home installation is not his forte and acting is not hers), Brad ‘n’ Kate are also reminded of pasts purposely forgotten and introduced to home truths intentionally kept secret, learning more about each other in half a day than they have done in the preceding three years.

And this is where the film starts to turn for the worse. For as the day progresses – as they pay visits to his new age hippie mum (Sissy Spacek) and her absent-in-childhood-but-now-trying-to-atone father (Jon Voight) – the standard sickly sweet sentimentality starts seeping in on the way to thickly laying on a mawkish message and happy predictable ending. Why film-makers feel the need to ruin perfectly enjoyable, if undemanding, fare with this unnecessary custom is unclear, because it’s ruined many a passable film before and will probably do so again.

Not that many punters will be put off by this, for formula is what Joe Public wants and enjoys and therefore gets. And in Four Christmases’ defense, there are many, many other worse examples of this blueprint in the history of straightforward cinema.