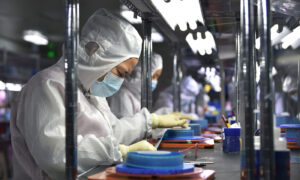 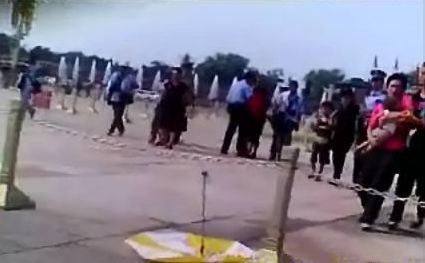 Beijing police arrest four children and four adults on Tiananmen Square for protesting on Aug. 4, 2013. The children had traveled from Inner Mongolia to Beijing in search of their mothers who had been arrested and disappeared after they lodged a complaint about corruption in their home town. (Human Rights Campaign in China)
China

Four children, including a two-year-old and an eight-year-old, travelled from Inner Mongolia to Bejing where they unfurled a banner on Tiananmen Square to protest against corruption by their local government and the disappearance of their mothers.

The children’s mothers, Zhao Yulan and Liu Yazhen from Chifeng City, Inner Mongolia, were arrested by Beijing police on July 28 after they went there to complain about corruption in their local government, according to a report from Human Rights Campaign in China. Their children have not heard from their mothers since.

Eluding police surveillance, the four children, along with four adults, made their way to the flag zone on Tiananmen Square where they raised a banner.

Mr. Zhao Yufu, a petitioner from Inner Mongolia who did not participate in the protest, told the Epoch Times that Beijing police arrested the two mothers of the children on July 28. Officials from their local area picked them up, and they have not been heard from since.

“These children came to Beijing and rushed to the flag zone to ask for their moms back,” Zhao Yufu said.

“They dashed into the flag zone. Zhao Jincai and his two-year-old sister Zhao Jinghui were the first to get there, she said. “Following them were Li Hongjie and her eight-year-old brother, Li Hao, and the rest of them. The police and plainclothes quickly arrived and seized them,” he added.

According to Zhao Yufu, Beijing police arrested everyone in the group, took away their cell phones, and arranged for them to be returned to their homes.

One of the children, Li Hongjie was detained by authorities in her hometown for 10 days.

The whereabouts of two of the adults who protested along with the children, Chu Dongfang and Wang Yubo from Heilongjiang, is unknown. There is no information on the other two adults, Zhao Yunxia and Zhang Jixin.

Translated by Hsin-Yi Lin. Written in English by Arleen Richards.