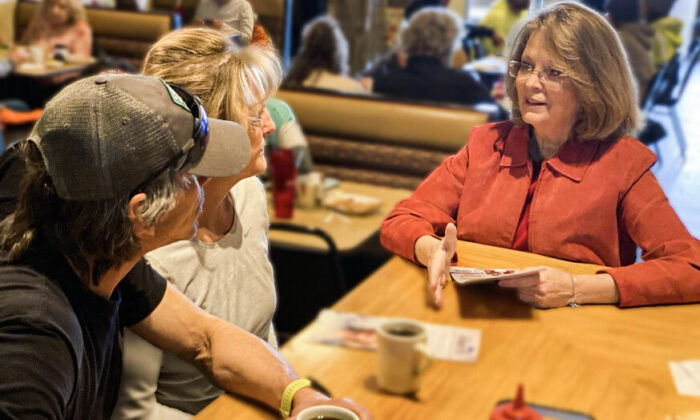 State Sen. Barbara Kirkmeyer (R-Fort Lupton) said she is appealing to Congressional District 8 Republican primary voters by touting a legislative record that includes 17 bills she sponsored being adopted since her 2020 election. (Courtesy of Kirkmeyer For Congress)
2022 Midterm Elections

A state senator, a mayor, a county commissioner, and a former Green Beret combat veteran who works in the oil patch are vying for the Republican party’s nod in the June 28 GOP primary in Colorado’s newly created Congressional District 8 (CD 8).

One of seven new U.S. House districts created nationwide following post-2020 Census redistricting, CD 8 is the first new district established in Colorado since the 2000 Census and reflects population growth east of I-25 north of Denver.

According to the Colorado Secretary of State Office, there are 115,404 registered Democrats, 102,922 registered Republicans, and 190,925 registered voters unaffiliated with any party in CD 8.

Despite a 3 percent advantage in active registered voters, the number of independent voters makes the district “competitive,” according to FiveThirtyEight. The Cook Partisan Voting Index rates CD 7 also as “competitive” with November’s election forecast a “tossup.”

State Rep. Yadira Caraveo will be the Democratic nominee. A pediatrician, she is running unopposed in the Democratic primary and figures to pose a stiff challenge for the GOP primary winner in the new district, which features the largest concentration of Hispanic residents, at 38 percent, of any Colorado congressional district.

Energy development and regulation are particularly relevant issues because many of northeast Colorado’s oil and gas workers live in the district.

Tyler Allcorn of Westminster says his background in the oil and gas industry gives him a hands-on perspective on how to sustain the area’s most dynamic economic asset.

“I grew up in an oil and gas family,” he said, noting his family emigrated to Colorado from Canada when he was nine years old. “To me, it’s personal.”

Despite the Biden administration’s recent initiative to tap into the nation’s strategic petroleum reserve, Allcorn said federal regulations imposed by Democrats “make it impossible to drill still. It’s a huge issue here, people are incredibly upset” about the bureaucracy as the prices for gas and diesel soar, also impacting the region’s farmers and cattle ranchers.

“Biden would rather spend millions flying over to The Middle East and make deals that will keep us energy-dependent” than to allow the domestic oil and gas industry to increase production to meet demand, Allcorn said.

That is “sending a clear signal” to voters in the district, Allcorn said, that Democrats “don’t want for our country to be energy independent.”

What sets him apart from his primary opponents is he’s the only candidate who is a veteran, serving as a Green Beret in the U.S. Army in Syria, and only one of the four who has never run for office before.

Jan Kulmann said as an engineer who has worked in the oil industry for years and as the mayor of Thornton since 2019, her background and experience will benefit the district.

“We do it really well in Colorado. We are able to produce oil and gas better than anyone else,” she said. “Living in this district, in particular, we must be able to address” energy policy by implementing regulations and oversight as done in Colorado.

Biden’s gas tax holidays won’t do the trick in lowering gas prices “until we can drill again and bring the product to market,” Kulmann said.

People are tired of “career politicians” and want elected officials who will get things done, she said. “I hear it all over. Well, I am an oil and gas engineer and a local government official, the mayor of a small town” as well as a mother, so she knows how to get things done.

All four CD 8 candidates’ campaigns have focused on the impact fentanyl has had in the area, tying it to “the crisis at the border,” said Republican state Sen. Barbara Kirkmeyer, noting five people in the district have died from fentanyl overdoses in the last year.

Getting fentanyl off the streets is a component of “securing our borders,” she said. The drug is being manufactured “in China, sent to Mexico, and then makes its way over our open border. People get the connection here.”

Kirkmeyer was elected to the state senate in 2021 after serving on the Weld County Commission. She said the experience that will make her a more effective federal lawmaker.

But it is her background as a dairy farmer and small business owner that she touts as assets in “making Weld Colorado’s a debt-free county and lowering property taxes; defending agriculture and energy workers and rural values and interests; resisting COVID-19 lockdowns and mandates” and “making Weld County a Second Amendment sanctuary from liberal anti-gun laws.”

Kirkmeyer said that is the gusto she’ll bring to Washington on behalf of Coloradans.

She said voters are saying “they don’t like the direction of the country is headed under Joe Biden’s and Nancy Pelosi’s policies” and, in Colorado, parents are alarmed about the state of the state’s school system.

Education is “not a federal issue,” Kirkmeyer noted, but said she is  “in tune” with parents seeking “educational freedom; they want to be able to decide what is best for their child” in terms of curriculum and schools and will support any congressional initiatives that expand school choice.

Weld County Commissioner Lori Saine, the fourth GOP hopeful in the CD 8 primary, reported raising $216,014, spending $102,163, and having $113,851 in cash on hand in her campaign’s June 8 FEC filing. Saine, of Firestone, did not return email/phone messages from The Epoch Times.

Despite being in third in terms of campaign fundraising, Kirkmeyer said her ground game is solid and will be the difference in coming in first on June 28.

“I have an all-volunteer staff, did not pay anyone, and we’ve knocked on 5,000 doors” finding people at home every fourth home “talking with them, getting my name out.”

Kulmann said she’ll also be door-knocking and calling voters the last few days. “This is a swing district. People are tired of the same old thing.”

She offers two more advantages that could give her and edge. She’s been elected as a conservative Republican in a Democrat city and she’s a mom with teenagers. “I solve problems all the time,” Kuhlmann said.

Allcorn said that fact that he’s raised more than $400,000 in mostly small contributions is a strong indication that his campaign has gained momentum from its humble grassroots foundation.

“I started on this trail with zero,” he said and has learned the key is “all about what to do to get your name out there,” which he will be doing much of in the last days in TV and radio commercials.