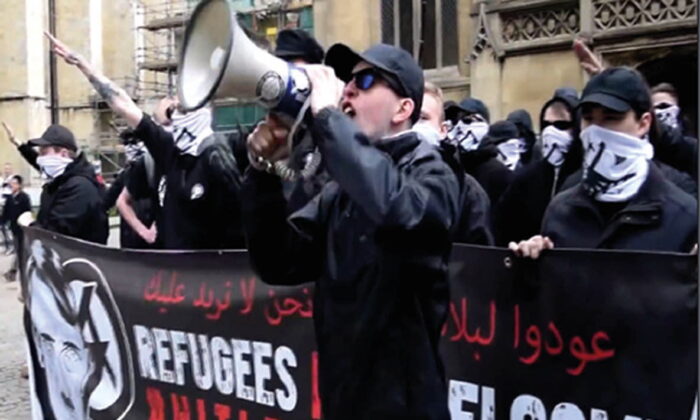 Alex Davies with a megaphone at a National Action demo in York, England, at the end of May 2016. (West Midlands Police/PA)
UK

The founder of National Action, a fascist organisation that is banned in the United Kingdom, has been convicted of being a member after it was proscribed.

Alex Davies, 27, was convicted of being a member of a proscribed organisation after it was banned by the then-Home Secretary Amber Rudd on Dec. 16, 2016.

Winchester Crown Court was told National Action was banned after it posted on Twitter congratulations to the man who murdered Labour MP Jo Cox and, in an attempt to get round the ban, Davies set up another group, NS131, which stood for National Socialist Anti-Capitalist Action.

Judge Mark Dennis QC said he would sentence Davies at the Old Bailey in London next month.

Davies is the 19th member of National Action to have been convicted of membership of the organisation.

Barnaby Jameson QC, prosecuting, told the jury National Action had “terrorised” towns across Britain and had called for an “all-out race war” but, giving evidence, Davies denied he believed in “fomenting a race war” because he thought white people would suffer in such a conflict.

Davies, who is from Swansea in south Wales, told the court he had been a member of the British National Party (BNP), the British Movement, and UKIP as well as the Hunt Saboteur Association.

He told he became “politically homeless” after the BNP “imploded” in 2014.

Jameson said National Action’s logo was based on that of the Sturmabteilung, the paramilitary wing of the Nazi Party which was purged in the “night of the long knives” in 1934.

Davies, who admitted to being a “national socialist,” formed National Action while at Warwick University and was exposed by an undercover reporter from the Sunday Mirror.

In 2016 he posed with a National Action flag in Germany and gave a Nazi salute at Buchenwald concentration camp.

But Davies told the jury he was “not a violent” person but believed black, Asian, and Jewish people should be repatriated to make the UK a country only for “whites.”

Nick Price, head of the Crown Prosecution Service’s counter terrorism division, said: “It is clear that Davies secretly set up a new right-wing terror group after the ban on National Action and had a leading role in recruiting people to join the group.”