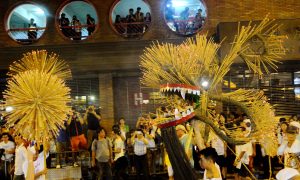 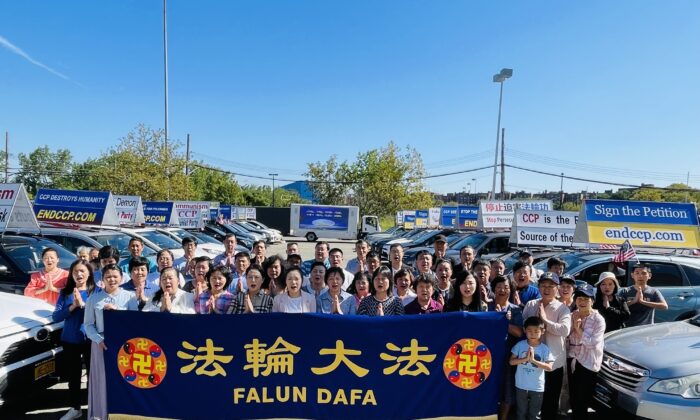 Over the past few days, greetings have flooded to the founder of Falun Gong for the Mid-Autumn Festival, a traditional Chinese holiday for family reunions that fell on Sept. 21 this year.

Mr. Li Hongzhi brought the ancient Chinese spiritual practice of Falun Gong, also known as Falun Dafa, to the public in 1992. It helps relieve stress and increases energy with five simple, slow-moving meditation exercises and moral teachings based on embodying the principles of truth, compassion, and forbearance in daily life.

However, well-wishers inside China had to keep their greetings anonymous as the Chinese Communist Party continues to carry out its 20-year-long persecution of Falun Dafa practitioners—arresting and killing those known to practice.

Hundreds of Falun Gong adherents rallied at Kissena Corridor Park in Flushing, Queens, on Sept. 12 to express their best wishes.

They say that it is their biggest honor to be able to cultivate Falun Gong, which provides them with improved physical and mental health. They thanked Mr. Li for introducing the practice.

Chris Petallides said he used to suffer from a severe heart disease ten years ago, having to take nearly 20 medications each day before finally having bypass surgery.

“My health improved and I’ve never touched a single pill since then!” Petallides said about the positive effects on his health after he started practicing. The 82-year-old engineer told The Epoch Times that he returned to work, something he never imagined would happen.

Sanez Bahedon, an international student from Iran, participated in a similar event in the square at the City Hall of Toronto, Canada, on Sept. 18.

She told The Epoch Times that she had lost herself in a degenerating world and taken to bad habits such as smoking and drinking. She said she happened to obtain a copy of Zhuan Falun, the principal book for the practice. On that same day, she stopped smoking and drinking.

Bahedon said Falun Dafa solved all her life issues and steered her into the true meaning of life. “Falun Dafa changed me entirely into another person,” Bahedon said. “My thankfulness is indescribable.”

Practitioner Yu Yanchun also sent her heartfelt thanks to Li on the traditional Chinese holiday.

In an interview with The Epoch Times, Yu said she developed functional uterine bleeding at 13 and epilepsy at 15 in her home city of Dalian in Liaoning Province, China.

“My capillary vessels were always damaged, unable to heal,” Yu said. “So, bleeding haunted me on most days of the month.” She was stuck with severe anemia.

Yu said a local senior traditional Chinese medicine expert told her she could only depend on medicine to stem the bleeding and that she had nearly lost her fertility forever.

In 1997, however, a colleague and practitioner from Shandong Province introduced Falun Gong to her husband. Soon Yu joined them in the exercises. To her amazement, both her bleeding and epilepsy disappeared. “Since then, I had no need at all to control my condition with medicine,” Yu said. “Nor did I need to see any doctor.”

To her great surprise, she got pregnant in 1999 and had her first son. In 2012, her family moved to Australia. Three years later, she had her second son.

“What Falun Dafa has given me is an exact rebirth.” Yu said. She credited the practice for blessing her with two smart and healthy children.

Lin Dan, Luo Ya, and Zhi Qing contributed to this report.