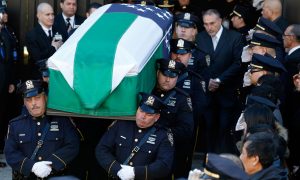 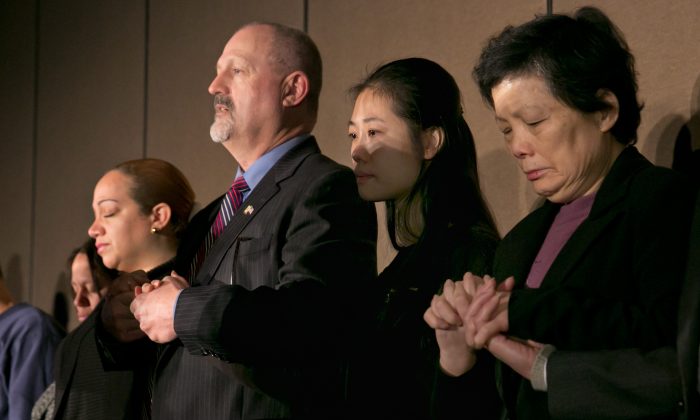 NEW YORK—More than 10,000 people from around the globe raised over $860,000 to help the families of police officers Rafael Ramos and Wenjian Liu pay for their home mortgages, the Stephen Siller Tunnels to Towers Foundation announced on Wednesday.

Officers Ramos and Liu were shot and killed ambush-style over two weeks ago in Brooklyn, while sitting inside their patrol cars. Shortly after their deaths, the foundation announced on Dec. 26 that they would collect donations to help Ramos and Liu’s families completely pay off their home mortgages. That would require at least $800,000.

By Wednesday morning, the foundation, which raises funds for supporting first responders and military critically injured in the line of duty, said donations had surpassed their goal. If the additional pledges of $150,000 come through, the total will reach over $1 million.

All the donated money will be given to the Ramos and Liu families.
— Frank Siller, foundation chairman and CEO

Half of the donations came from the New York metropolitan area. Donations also came from the other 49 states, Washington D.C., Puerto Rico, as well as overseas countries like Italy, Canada, and Australia.

Chairman and CEO of the foundation Frank Siller said all the donated money will be given to the Ramos and Liu families. The amount remaining after paying off their mortgages can be spent on “fixing up their homes” however they choose, Siller said.

At a press conference held at the Conrad New York Hotel in Lower Manhattan, Officer Ramos’ sister Sindy Ramos thanked the NYPD and fund donors for their support.

Sindy Ramos said although nothing will ever bring her brother back, knowing that Ramos’s widow and sons “will sleep a little better at night fills a little bit of that gap.” Ramos’s widow Maritza was also in attendance, but chose not to speak publicly.

Liu’s widow Pei Xia Chen also appeared with Liu’s father and mother. Her voice at times trembling with emotion, Chen thanked everyone for their generous contributions, and told the roughly 300-strong audience of police officers: “to my extended blue family, be safe out there.”

The police officers—some of whom were from the 84th precinct where Liu and Ramos worked—repeatedly stood up and applauded loudly during Chen and Sindy Ramos’s remarks.

Giuliani, who is also chairman of the foundation’s annual charity run, praised the NYPD as the “finest law enforcement agency in the country,” noting that they were the most restrained police department in terms of use of force, while still being able to drastically reduce crime rates across the city.

NYPD Deputy Commissioner Tucker called Liu and Ramos “guardians at the gate” who sacrificed their lives for the city. He assured the officers in attendance that the public still supported them, seemingly in an attempt to boost morale within a department shaken by two police deaths and a recent stream of anti-police protests.

“To the extent that you think people don’t really care, don’t really pay attention, and don’t understand the pain of what we go through in the job, I think they do. Not everyone, certainly, but I think for the most part, folks out there are supportive,” Tucker said.

At the same time, disability pension packages for junior officers seriously injured on duty are part of an ongoing contract dispute between the city and police unions.

The unions have been pushing for junior officers to receive the same compensation as veteran officers, arguing that current pensions of $22,000 a year are not enough to support injured officers and their families.