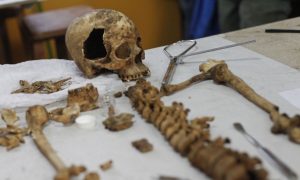 Fossils Show BC Once a Home Where Ancient Hedgehogs Roamed

Scientists have found fossils of the 50-million-year-old mammals in Driftwood Canyon near Smithers, B.C., the first mammals found preserved in the well-known fossil beds of the provincial park.

Biologist David Greenwood of Brandon University in Manitoba says both animals were identified from jaw bones—a fingernail-sized hedgehog jaw found in 2010 and a hand-sized tapir jaw found in 2011.

Greenwood says North America at that time was tropical and the Bulkley Valley area was a temperate plateau that received occasional frost where maple and elm grew alongside palm trees.

Palaeobiologist Natalia Rybczynski from the Canadian Museum of Nature says the hedgehog jaw was so tiny that it couldn’t be removed from the rock, and had to be scanned and digitally assembled into a virtual 3D specimen to make the identification.

The study—published in the latest issue of the Journal of Vertebrate Paleontology—says the tiny animals offer a new clue in the puzzle of what most of Canada looked like in the early Eocene era.