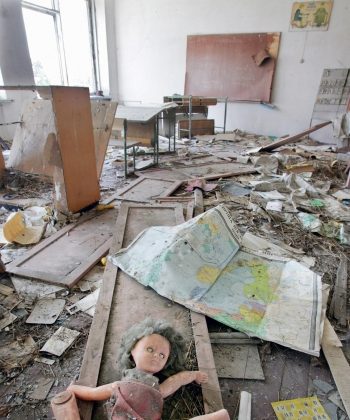 A classroom in the Ukraine 20 years after the entire population fled the city. Once a premier European destination, Prypiatâ��located next to the 1986 Chernobyl nuclear disasterâ��is now overtaken with weeds and wildlife. (VIKTOR DRACHEV/AFP/Getty Images)
Beyond Science

Fossils of the Future

Bleak, devastated, and chilling. There is probably nowhere in the world more appropriate than the Ukrainian city of Pripyat to glimpse what a future abandoned metropolis could become. Located next to the site of the 1986 Chernobyl nuclear disaster, this ghost town features long vacant schools with desks that still face blackboards and large buildings that have been deserted for years. Once a premier European destination, Prypiat is now overtaken with weeds and wildlife.

Like Prypiat, other cities around the world have also experienced complete abandonment. These sites give scientists a clue as to what sorts of changes the remnants of our modern civilization could expect if a major calamity were to occur and humanity disappeared.

According to Alan Weisman—a professor at the University of Arizona, and an award-winning scientific journalist whose reports have appeared in Harper’s, The New York Times Magazine and The Atlantic Monthly—if the human race as we know it were wiped out overnight, the fundamental characteristics of our civilization would probably degrade at a rate much faster than people might imagine. Following a scenario of either natural or manmade disaster, cities would quickly be devoured by jungle, and in less than just one millennium, astoundingly little would remain. What was left behind would provide few clues for future generations to determine whether their ancestors drove automobiles and built skyscrapers, or had instead been loincloth wearing nomadic hunters.

In his 2007 Best Seller “The World without Us” Weisman consults atmospheric scientists, art conservators, zoologists, oil refiners, marine biologists, astrophysicists, and paleontologists, to convey the alarmingly swift erosion our modern cities would undergo in the days, years, and decades after the disappearance of man.

“Within two days, without pumping, New York’s subway would impassably flood. Within twenty years, water-soaked steel columns that support the street above the East Side’s 4-5-6 trains would corrode and buckle. As Lexington Avenue caves in, it becomes a river. In the first few years with no heat, pipes burst all over town, the freeze-thaw cycle moves indoors, and things start to seriously deteriorate. Plugged sewers, deluged tunnels and streets reverting to rivers will conspire to waterlog foundations and destabilize their huge loads, toppling structures. Gradually the asphalt jungle will give way to a real one,” says Weisman on the website for his book, when asked what New York might look like if humanity suddenly disappeared.

According to these scientists, from the first day that man no longer tends to his civilization, the force of nature immediately takes over.  In fact, it would only be about a century before cities like Buenos Aires, New York or Madrid would whither away. Built of glass, steel and concrete, our civilization would in fact leave much less behind than the Mayan ruins made of stone—a material more resistant to the passage of time.

Weisman demonstrates that the most solid cement structures of our modern urbanisations would quickly return to the earth. Of course, certain substances like plastic, bronze structures, and other man-made materials would live on much longer.  However, when this remaining evidence was later unearthed—worn, weathered and without the context of our massive infrastructure—what would future generations make of these elements? Throw in the very real possibilities of flooding, earthquakes, tectonic shifts and other natural processes to further obscure the past, and in just two millennia’s time future civilizations may have no way of knowing about the technological advancements of our era.

But what evidence determines our history? The majority of archaeologists and researchers insist that civilizations more technologically advanced than our own could not have existed many thousands of years ago. However, several hundred very sophisticated artifacts, structures and works of art determined to have come from an extremely remote time, suggest that the world has seen the rise and fall of humanity more than once. Because of this growing body of evidence, this idea has begun to gain favor among several professors and researchers around the world. Consider the Oklo nuclear reactor in the Gabon Republic that scientists determine nuclear fission took place more than 1.5 billion years ago; stone carvings depicting modern aircraft like helicopters and a vehicle resembling a land-speeder from Star Wars found in an ancient Egyptian temple at Abydios; or the exquisitely rendered, 30,000 year old cave paintings in Chauvet, France which portray a keen sense of observation and skill. Although the evidence we see today involve primitive elements likes caves and rock, the sophistication these examples exhibit speaks of beings at a fairly developed level. Similarly, the unintended time capsule we would leave behind to generations thousands of years into the future would merely provide a small and cryptic window into our daily world?

If our technology and civilization could prove to so easily disappear after we depart, what does it say of the understanding we have of our ancient ancestors? The Mayan, Aztec, Hopi, and other cultures share similar stories of four distinct humanities preceding our age. Other accounts suggest that humanity’s legacy stretches back even further. If there were such advanced human civilizations that existed long ago, what happened to them? How did they die out? And could it happen again?