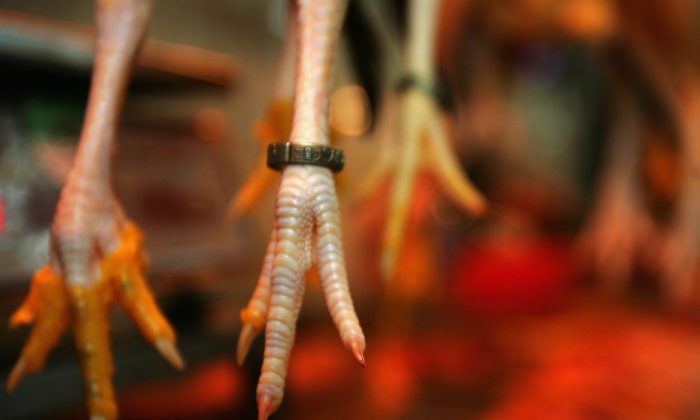 Chicken feet that expired in 1967 were spruced up with chemicals and sold in Chinese markets this year. (China Photos/Getty Images)
China

Smugglers have been caught selling extremely old meat in Chinese markets, including chicken feet that expired in 1967.

Chinese police seized the chicken feet from a group of Vietnamese smugglers in China’s Guangxi Province in May. They raided the smugglers’ facility and confiscated 20 tons of meat, including beef tripe, throat, and the substandard feet.

The smuggling network brought the meat across the border from Vietnam to China, processed it in their facility, and sold it in markets.

The chicken feet were frozen when they arrived in China, according to the South China Morning Post. The smugglers used hydrogen peroxide and other chemicals to make them look fresher, kill germs, and plump up the feet so they would weigh more, local official Li Jianmin told China’s state-run media Xinhua, according to the Telegraph.

“The entire processing facility had a fishy and foul smell,” Li told Xinhua according to the Post. “You just couldn’t stand it after one or two minutes.”

When the chicken feet were fresh and fit to sell, the Vietnam War was going on, China was in the Cultural Revolution, and Lyndon Johnson was president of the United States.

This is only one example of the kind of food Chinese consumers are faced with these days. In May, Shanghai restaurants were caught serving rat, mink and fox meat instead of lamb, the Telegraph reported.

The Post reported a case of rotting bear paws that were cooked and served last year in restaurants in China.