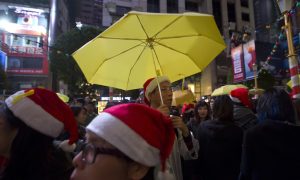 Fortune Stick Advises Hong Kong Not to Be Dazzled by Profit

The second day of Chinese New Year was the traditional festival of Che Kung, during which Lau Wong-fat, chairman of the Heung Yee Kuk (Rural Council), draws fortune sticks for Hong Kong at the Che Kung Temple.

For the past ten years, the fortune sticks have always accurately predicted Hong Kong’s future for the coming year. This year a No. 20 fortune stick was drawn.

The message on the stick is written as a poem in Chinese, which is loosely translated as: “Morning dew reflects rainbow colors and clouds like beautiful women’s hairstyles/Jade ornaments and pearls look as bright as silver/The form is nonexistence, and nonexistence is the form/Bodhisattva Guanyin has advised the people.”

The interpretation is that one should not be greedy, but allow oneself to be mediocre; peace for the family; and that seeking desperately for fortune is not fulfilling.

Feng shui master Yau Chi-wai said that the first two lines of the poem mean that all the beautiful scenery has been built, but a lot of things are only on the surface.

He said that the words on the fortune sticks have two meanings: “The first is that morning dew and beautiful clouds in the sky disappear fast. The second meaning is that women beautify themselves, but these looks and appearances are all illusory.”

The meaning suggests that it looks as if something is prosperous, but it is only a shell.

“So we need to be contented with what we have, and not covet shallow things,” Yau said. “We should instead be wealthy in our hearts; down-to-earth is better.”

As for the latter two lines, “The form is nonexistence, and nonexistence is the form/Bodhisattva Guanyin has advised the people,” Yau said they mean “a lot of things are predestined, it cannot be forced … at present, Hong Kong’s prosperity may just be an appearance, while in reality, there are already a lot of problems.”

In 2003, a stick representing bad fortune was drawn. The SARS outbreak and the legislation of Article 23, which aimed to silence all anti-communist voices in Hong Kong, both occurred that year.

The fortune sticks from Che Kung Temple have shown themselves to be accurate for the past decade, particularly when Hong Kong Chief Executive Leung Chun-ying took office in 2012 and the middle fortune stick 29 was obtained. In 2013, the “beware of a wicked person” stick was drawn.

Both preceded the series of crises that have happened since Leung took office.

Apart from corresponding to Hong Kong’s situation, this year’s fortune stick has another meaning. In the past year, there have been major changes in the Chinese Communist Party.

Current Party leader Xi Jinping has been using an anti-corruption campaign to eliminate supporters of former Party leader Jiang Zemin. Dozens of provincial and ministerial officials have been sacked, including former secretary of the Politburo Standing Committee Zhou Yongkang, former vice-chairman of the Central Military Commission Xu Caihou, and former Head of the United Front Work Department of the Central Committee Ling Jihua.

This year, the Chinese government has continued to clean out Jiang’s forces.

Current Politburo Standing Committee members Zhang Dejiang and Liu Yunshan, as well as former vice-president Zeng Qinghong, were all loyal to Jiang and his son. They were once at the top of the hierarchy, but now they cannot even protect themselves.

Coinciding with the content from the fortune stick, this is a warning that greed will bring bad consequences.

Chief Executive Leung Chun-ying, who was supported by Jiang’s faction, was exposed last year for accepting $50 million from Australian business UGL. Earlier he was also involved in his son’s scandal of raising over four billion dollars.

These have planted time bombs in Leung’s career, also coinciding with the fortune stick’s message about not being greedy.