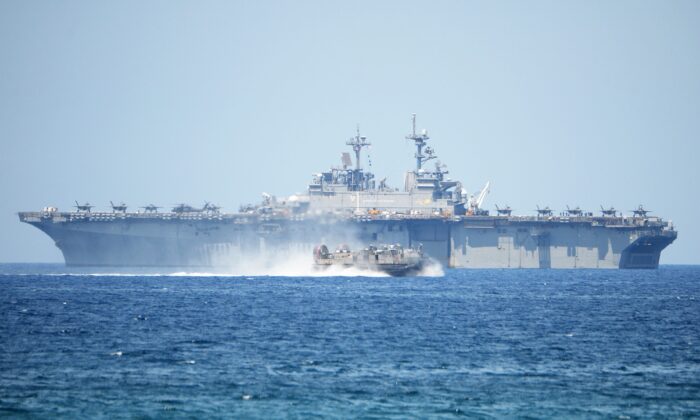 A U.S. Navy hovercraft speeds past the USS Wasp, a multipurpose amphibious assault ship, during the amphibious landing exercises as part of the annual joint U.S.–Philippines military exercise on the shores of San Antonio town, facing the South China sea, Zambales Province in the Philippines, on April 11, 2019. (Ted Aljibe/AFP via Getty Images)
Thinking About China

Many analysts worry the Chinese regime has the edge in a quick war to seize disputed territory. But a plan for new, small and lethal U.S. Marine units are trying to turn the tables on Beijing.

These stories might drive clicks and spur military funding, but they don’t accurately describe game-changing technology. Among other matters, they don’t account for the constant innovation and adoption performed by the U.S. military. Most of these clickbait stories only present one side, the new technology, and not the innovation of the other side that upgrades existing technologies to defend against those new technologies. For example, hypersonic missiles are new, faster, and harder to track. But the United States is responding by upgrading its ability to track and target missiles.

In addition to upgrading technology, the United States is looking for new and better ways to use this technology. One of the weaknesses of American forces is that they need time to “build up” forces in an area before they fight a major war. The current thinking is the danger is not a long war, but one that is over before America can use its military might. China will have an overwhelming number of missiles to create an anti-access/area-denial (A2/AD) bubble to prevent access and deny American entry into the disputed region beyond maybe the single carrier strike force on hand.

With American forces temporarily held at bay, the Chinese regime will seize some disputed territory, probably in the South China Sea, build it up, and present America with a fait accompli. This is like what the Chinese communists (Chicoms) have done with many of their border wars with neighbors, such as the Ussuri River Skirmish with Russia. With the example of the Russian seizure of Crimea in mind, the Chicoms would essentially dare America to spend the next nine months preparing for war to take it back, and assume (with some justification) that American leaders wouldn’t have the political will to summon the military strength.

But America is seeking to field new units that represent a change to force structure and logistics, while judiciously incorporating some new technology to take that weakness and fortify it. The Marines are disbanding some units, like tank battalions, to create small units of about 75 that could be easily inserted into a combat zone. It is important that they pack a punch and be easily deployed and supplied. Using light and mobile, but advanced and long-range technology, they would target rival capital ships and relay that information to friendly aircraft and ships, jam or confuse enemy missile swarms, and generally allow the quick reaction carrier group to better respond and operate with China’s A2/AD bubble.

These units recall the Raider Battalions from World War II, which ditched many of its heavy weapons and equipment to achieve mobility and operate deep in enemy territory. But the modern Marine Corps is testing how it could field its forces in light units that can operate within the range of Chinese missiles, while still retaining potent combat power and freedom of movement.

For example, once in theater they could use portable water and power generators to reduce supply needs. This is important as Chinese strategy aims to hit U.S. logistical units like refuelling planes and the supply ships. The Marine units might be hard to hit, but if they can’t be supplied, they would quickly lose effectiveness. So they are being organized not to need huge amounts of supply.

One of the frequent complaints of the U.S. military is that it needs months and literally millions of tons of supplies before it’s ready to engage the enemy. Despite fighting in the 2003 Iraq War with fewer stockpiles, and the time the United States gave to diplomatic considerations, it still took as much as nine months to prepare the stockpiles needed. The Marine light units in a future fight are designed to deploy and fight immediately.

This is where the judicious use of new technology applies, as the military is well on its way to having unmanned aerial vehicles (UAVs) or unmanned underwater vehicles (UUVs) that can perform these missions. Think of a militarized version of Amazon drones. An additional advantage is that these technologies won’t put merchant seamen in harm’s way, unlike what happened to the soldiers during the Battle of Guadalcanal, the U-boat Campaign, and the American attacks on the Japanese merchant marine during World War II. The benefits of these potential UAVs or UUVs is that they can be piloted remotely from the safety of a U.S. base or submarine, far outside of China’s missile range, to resupply the Marines disrupting the enemy.

The danger is that these small units will be overwhelmed in the event of war, especially a long one. The units would contain as little as 75 Marines which seems paltry compared to the size of China’s People’s Liberation Army (PLA) and the number of missiles they could launch. But these Marines are designed to counter a quick, pre-emptive strike from potential adversaries, and its assumed they can be augmented by regular forces in a long war.

But the bigger danger is a short war. As a result, these Marine units address a weakness in the structure of the United States that seems to invite quick, small wars to seize disputed territory before America could organize and deploy its military might. They promise to turn what might be an Achilles heel of the U.S. military into a strength. Instead of the Chinese regime using its missiles to create an A2/AD bubble of missiles to keep American forces out, the United States can insert a small unit to create its own bubble that would make it difficult for Chinese forces to operate. These Marine units can create a deterrent that makes a small quick war less attractive.