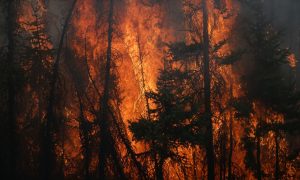 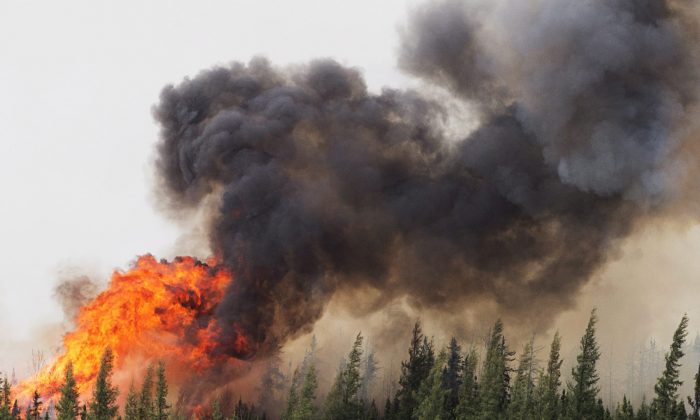 A wildfire burns south of Fort McMurray, Alberta, near Highway 63 on Saturday, May 7, 2016. (Ryan Remiorz/The Canadian Press via AP)
Canada

Wildfires doubled in size from midday Friday to midnight Saturday in the Fort McMurray area of Alberta, Canada, and are expected to grow, according to an update at 8 p.m. on May 7, on an official website.

The wildfires were expected to cover 200,000 hectares (over 772 square miles) by Saturday midnight.

More than 500 firefighters are battling the blaze in the specific area, with the help of 15 helicopters, 14 air tankers, and 88 other pieces of equipment.

Throughout the province, over 1,400 firefighters, about 133 helicopters, 295 pieces of heavy equipment, and more than 27 air tankers are fighting the fires.

About 19,000 people were evacuated in the past two days, 12,000 of them by air and the rest through car convoys of as many as 2,400 vehicles that were led to safety through the affected area by authorities on Friday and Saturday.

No casualties have been reported yet.

“Our goal is to have everyone evacuated to the south by the end of the day,” Alberta Premier Rachel Notley wrote in a Saturday update on her Facebook page.

Authorities ordered the initial evacuation on May 3. Many people didn’t have much time to pack their belongings and some were leaving the city while it was already burning.

Most of the 88,000 evacuees traveled south towards Edmonton. About 25,000 went north to oil sand fields work camps, according to CBC.

Yet the camps couldn’t hold them for long and, meanwhile, their only access line, the Highway 63, was closed because of the spreading fires. Starting Friday morning the authorities escorted the northern evacuees through the fire-ravaged region to the south.

Authorities haven’t determined what started the fire, yet there’s been a word on what could end it. “Rain. Lots of it,” Tweeted the Regional Municipality of Wood Buffalo, where Fort McMurray lies.

Rain. Lots of it. RT @prettyboyparam: what is it going to take for this wildfire to stop? It seems like nothing is working.

Shortly before Sunday noon there had been some rain, but it only lasted a few minutes.

It was only for a few minutes but the sight of rain has never been so good #ymmfire #FortMacFire pic.twitter.com/dp862ZWf1g

People are still waiting for news on the state of their homes, while authorities ask for patience, saying damage assessment takes time. It has been reported that 1,600 structures have been damaged in the city.

“We know from all the calls that you’re getting frustrated because you don’t have any information on your homes. We’re really working hard on that,” said Darby Allen, fire chief for the Regional Municipality of Wood Buffalo in a Saturday night Twitter update.

A message from Darby Allen to the Wood Buffalo community – May 7, 8:40 p.m. #ymmfire #FortMacFire pic.twitter.com/fvkYFpfMVb