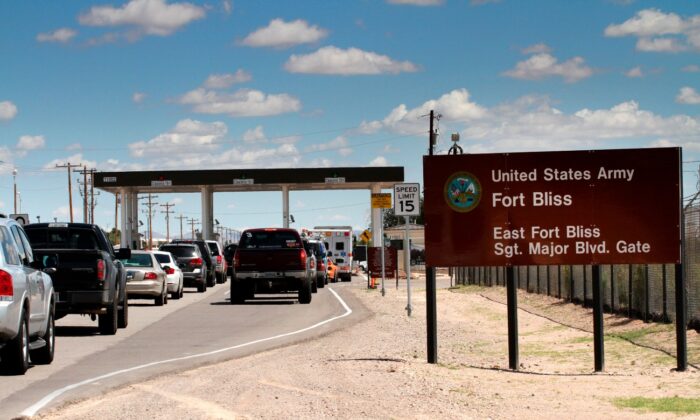 An emergency holding facility in Fort Bliss, Texas, will receive its first 500 unaccompanied minors from Customs and Border Protection (CBP) custody on Tuesday.

The U.S. Department of Health and Human Services’ (HHS) Office of Refugee Resettlement (ORR) announced that the Fort Bliss Emergency Intake Site, which is located near El Paso, will take in the group of unaccompanied male youth aged 13 through 17, who had crossed into the United States illegally. The department will provide the children with lodging, basic necessities, and a brief medical check, including COVID-19 screening.

The opening of the temporary illegal immigrant shelter at Fort Bliss, which has a potential capacity of 5,000 beds, is part of efforts to alleviate crowding at other detention facilities following a significant surge of illegal immigrants at the U.S. southern border. While most single adults and some families are being turned back, the Biden administration is accepting all unaccompanied minors—children who unlawfully enter the country without an adult.

The transfer of children to the Fort Bliss military facility comes about a week after the Pentagon approved HHS’s request for room to construct a temporary housing facility at Fort Bliss. HHS assured the Defense Department that the arrangement would not impact military training and operations.

On Monday, the ORR announced that another 500 unaccompanied male youth were transported to a separate emergency holding facility in San Antonio.

The San Antonio Freeman Expo Center has been partly transformed to provide shelter for boys aged between 13 and 17, the department said. That facility has a potential capacity of 2,100 beds with an additional 300 medical beds.

The administration is currently seeking to build a bed capacity of 13,500 beds, with the potential for additional capacity in order to meet the continuous flow of unaccompanied minors coming across the border.

About 17,200 unaccompanied minors were in the custody of either CBP or HHS as of March 29, according to the HHS Administration for Children and Families.

Rep. Tony Gonzales (R-Texas) shared photos of the Fort Bliss shelter during his visit of the holding facility. In one of the photos, Gonzales could be seen pointing toward an area with five white tents with protective fencing.

I visited Fort Bliss to see the new the unaccompanied minor shelter being stood up there. The facility at Fort Bliss is set to receive children on March 30 and will hold 5,000 beds for unaccompanied children who cross the border. pic.twitter.com/gE18x1Ufsh

The Biden administration is currently racing against time to address the sharp increase of illegal immigration in recent weeks. Upon taking office, President Joe Biden reversed several Trump-era immigration policies, including his predecessor’s key Migrant Protection Protocol, which sought to end the problematic “catch and release” policy and is credited for significantly stemming the flow of illegal immigrants in 2019.