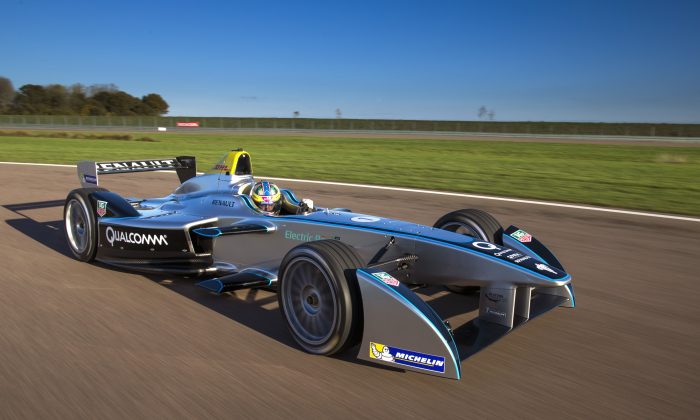 The future of racing is a step closer—a clean, silent step.

The latest FIA-racing series, the all-electric Formula E, successfully tested its zero-emissions Spark-Renault SRT_01E at the La Ferté Gaucher circuit near Choisy-le-Roi, France in the third week of November.

The battery-powered Spark-Renault completed 40 laps over two days, demonstrating that the basic systems functioned properly. The car was operated at 25 percent power—the battery produced only 50 kilowatts, not the 200 kW (270 bhp) battery which will power the car in competition.

Former Virgin Racing F1 pilot Lucas di Grassi, who drove the Spark-Renault, said in a press release, “It is a great feeling to be driving the Formula E car for the first time.

“I can assure all the drivers will have a lot of fun with this car—even with just a quarter of the power it has quite a lot of grip and the electric motor produces huge torque.”

The Spark-Renault was built by a consortium of racing companies. Spark Racing Technology is responsible for the construction and assembly. Italian constructor Dallara, which has decades of experience in sports cars and single-seaters, built the carbon-fiber and aluminum monocoque to pass the same crash tests as Formula One cars.

McLaren Electronics, another company with decades-deep roots in sports car and open-wheel racing, provided the powertrain and electronics, while Williams Advanced Engineering, affiliated with the Williams F1 team, developed the batteries.

“Everything went very well and it was a very positive maiden run for the Spark-Renault SRT_01E,” said Frédéric Vasseur, President of Spark Racing Technology.

“We were also running with a much smaller battery than we will use—just 25% of the full power—which again gives us confidence going forward. The next test is planned for the coming weeks where we want to increase the mileage on the car, working our way up to a full race simulation.”

The car, which will weigh 800 kg (1764 lbs) with driver in full race trim, will race on street courses in ten different cities, including London, Beijing and Los Angeles, showing the world that electric vehicles do not have to be dull commuter vehicles, and that electric racing cars can be both cost-effective and reliable.

The season is scheduled to begin in September, 2014, with the grid limited to ten two-car teams.

Alejandro Agag, CEO of Championship promoters Formula E Holdings, said: “The first test was a historic moment for the championship and we’re delighted with how it has gone. We think teams, drivers and fans will love the way it looks and sounds.

“Now Frédéric and his team, together with Lucas, will begin to put mileage on the car, focusing on durability. It’s a very exciting development and we can’t wait for that first race in Beijing in September 2014 to see all 20 cars lined-up on the grid.”

For more information and updates, visit the Formula E website.